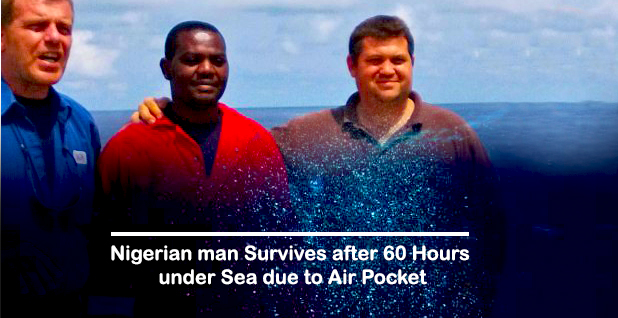 A 29 years old Nigerian guy Harrison Okene survived after two and half days under 98ft deep in seawater at the freezing point. He was on board the tug Jascon-4 boat and unluckily the boat sink in the depths of the sea. Harrison was the fortunate person on the board as he managed to move in an air pocket in the boat and able to get enough oxygen to breathe. There were twelve people was traveling in total including Okene, among them, ten bodies found already, and one person is still missing. The operational team of this accident said that they think that after a lot of time passage Mr. Harrison assumed to be the single survivor in this deadly mishap.

What Happens to Harrison Okene after drowned 30m under Sea

According to the survived victim, he heard the sound of fish eating the dead bodies of his companions in the submerged boat. On 26 May the Jascon-4 keel over about twenty miles (32km) off the coast of Nigeria, when it was stabilizing an oil tanker at the platform of Chevron. The owner of the ship stated that the only survivor was traveling on the boat as a cook. Harrison tells the authorities that he was in the toilet when he comes to know that the boat capsized and the vessel goes under the water surface. After that, he managed to find a way comprising of the air pocket.

Nigerian guy Harrison Okene further expressed that he was in complete darkness under the water and he starts thinking that it will be his life’s end. He was so frightened, and the thoughts totally disturbed him that sooner the water will fill the room where he was staying, but it didn’t. Moreover, the man said that he was so hungry but the thirst was at its peak, and it was unbearable. The salt water of the sea took the skin of his tongue. Okene shared his feeling that he could perceive his crew’s dead bodies nearby him which he could smell. After some time the fish came and started eating the dead bodies of his fellows, and he could hear that sound very clearly.

Every moment he was spending in the air pocket was dragging him towards death, but after sixty hours he listens the sound of knocking. West African Ventures and Chevron sent a team from the DCN global diving company to investigate the whole scenario. After he sees alive human beside him, he becomes hopeful for his life survival. One of the spokespersons from the DCN team said that they were expecting a dead body there. Harrison suddenly holds the second diver who was passing before him, and he was frightened at that moment. After this pleasant instance, the whole nature of the operation got changed.

While man stayed several hours in the depths of water, so there were a lot of complex problems to take him out safely. He needs time to stay in a decompression chamber for some time to make his body pressure in a normal state. Otherwise, there was a huge chance for the victim to have a cardiac arrest or have to face some serious issues regarding neuro. Harrison himself concludes his saved life as a miracle. However, he told that while sleeping on his bed at home, sometimes he feels that his bed is sinking and is undersea, after that he screamed and jumped up from his bed.