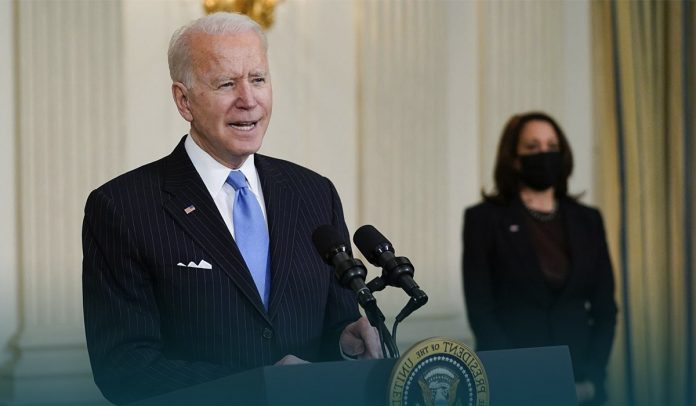 U.S. President Joe Biden stated the U.S. expects to take delivery of enough COVID-19 vaccine for all adults by the end of May 2021, two months earlier than anticipated. Moreover, he pushed all U.S. states to get at least one dose into the arms of teachers by the end of March to accelerate school re-openings.

Biden said that they’re now on the right track to have enough vaccine supply for every adult in the U.S. by the end of May.

The official said that the work of vaccinating Americans could extend well into the summer despite the stepped-up pace of vaccine production, depending on both the administration’s capacity to deliver shots and Americans’ willingness to roll up their sleeves for injecting a shot.

Joe Biden’s statements immediately raised expectations for when the country could safely emerge from the epidemic with the speedier inoculations pledge. But even as he expressed confidence, Mr. Biden quickly tempered the outlook for a return to everyday life as it was before the coronavirus hit.

Mr. Biden said, before saying his hope for a return to normal was sometime before this time next year that he has been notified not to answer that because they don’t know for sure. The president said that several states across the nation were moving to relax virus-associated restrictions. All this happened against the objections of the White House and also the the state’s top infectious disease expert, Dr. Anthony Fauci, warned to ease virus protocols until the health officials immunize more U.S. people.

Earlier, Dr. Fauci has said the country must achieve an inoculation rate of about 80 percent to reach herd immunity. According to the Centers for Disease Control and Prevention, they inoculated only about 8 percent of the population, though the vaccination pace is increasing. The United States set a new daily record for injecting shots last Thursday and Friday.

The Biden government told governors to make arrangements to administer even more shots in the coming weeks in hopes of an increasing number of injections even further. More shots are also in the direction toward the federally backed program to administer doses in retail pharmacies, which federal officials believe can double or triple their pace of vaccination.

This week, over 0.8M doses of the J&J vaccine will also be distributed to pharmacies, on top of the 2.4M they are now getting from Moderna and Pfizer.

Those pharmacies will be key in getting the injections into the arms of teachers, particularly in the roughly 20 unpriortized U.S. states. Moreover, the intention is to help re-open schools to better educate students who have been at risk of falling behind during the epidemic and lessen the burden on parents who have had to choose between a job and childcare.

The U.S. President said to treat in-person learning as an essential service. The administration said that the teachers would be able to sign up directly through participating retail pharmacies.

Jen Psaki, The White House Press Secretary, also announced on Tuesday that the federal government was increasing the supply of Pfizer and Moderna vaccines to states the next week to 15.2M doses per week, up from 14.5M previously. All US States will also receive 2.8M doses of the J&J shot this week.

Jeff Zients, White House COVID-19 coordinator, said on a call with governors on Tuesday that states should prepare to administer 16M to 17M total weekly doses of Moderna and Pfizer vaccines by the end of March, climbing to 17M to 18M weekly by early April.

J&J’s supply doses to states, expected to dip after the initial delivery this week, will climb to 4M to 6M weekly shots by the end of March and 5M to 6M doses weekly through the end of April.

The officials have said J&J faced unexpected manufacturing issues with its vaccine and produced only 3.9M doses before being cleared for emergency use authorization on Saturday. The company has promised to deliver 100M doses by the end of June 2021.

Before the approval of the Johnson & Johnson’s doses, Joe Biden had proposed that it would take until the end of July 2021 to have enough vaccine for every adult in America.

Jen Psaki stated that an across-the-administration effort was required to get the two historic rivals to work together on the COVID-19 vaccines, even though conversations between J&J and Merck have been going on for months. She said that there is a difference between conversations and it moving forward.

The White House said Merck would devote two manufacturing plants to the production process. One would manufacture the vaccine and the other would handle inserting the vaccine into vials and ensuring strict quality controls. Jen Psaki said that the U.S. government was using its powers under the Defense Production Act to help Merck retool to work on the vaccine production.

The federal officials have warned that setting up the highly specialized manufacturing lines to produce vaccines would take even months.

As compared to the two-dose versions produced by Pfizer and Moderna, the J&J vaccine is less resource-intensive to distribute and administer, making it critical for American plans to spread inoculations around the world, but only once U.S. people are inoculated.

The J&J vaccine can be stored for months at refrigerated temperatures (rather than frozen) and does not require patients to come again for a second shot 3- 4 weeks later.

The Kenilworth, a New Jersey-based Company, stated that Merck remains steadfast in its commitment to contribute to the global response to the epidemic and to preparing to address future pandemic hits.