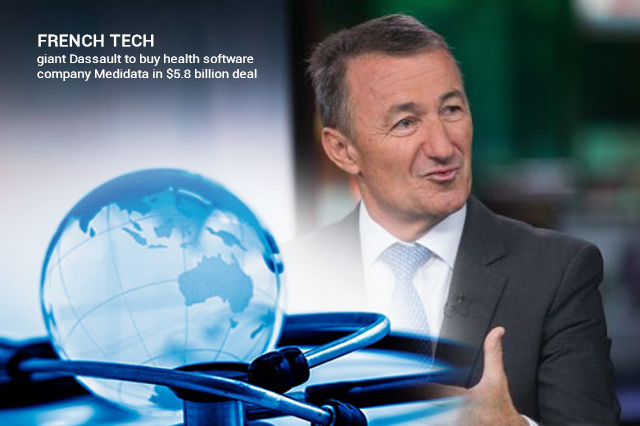 Dassault Systems, the French tech giant, made a deal to buy Medidata Solutions, a health software company in a $5.8 billion deal. According to Dassault, it was giving the offer of $92.25 per share for Medidata that was a minor discount to Medidata Solutions with a closing price of $94.75 on 11th of June.

The CEO and chairman of Dassault Systems, Bernard Charles, said that it is the logical evolution of the scope what they do. Charles added that life science is moving towards a speeded digitization of its own processes. Furthermore, he said that that is the inspiration for the company to purchase Medidata Solutions.

The software of Medidata used to help the clinics to manage their data and back-office operations. Also, it provides analytics tools so they will able to make sense a large amount of information. Companies of medical devices also use the app to track the clinical trials process.

A medical tech investor at NaviMed Capital, Bijan Salehizadeh said that Medidata always has an extremely well-run organization and a juggernaut in their space. It is an A+ asset, he added. The deal finalizes after the M&A market picks up for rapid-growth software companies. Google picked up a data analytics company Looker in recent past days for $2.6 billion, and Salesforce with its historic massive deal ever in $15.3 billion of Tableau Software.

Medidata hit the waves in 1999 and goes public after its ten years of establishment. It is competing with the software vendors likewise Veeva, IBM and Oracle. The revenue of the company improved 17% in the previous year up to $635.7 million. The firm reported its net income as $51.9 million. The market value of the company is $5.9 billion, and last year, the stock moved up to 17%. It increased an extra 6% after the deal news circulation.

Dassault sells their company tag software to life science, transportation, and aerospace companies to digitize their businesses. The 3D designs of the company give the advantages to the businesses with virtual designs of products, and in product development, it enables the digital simulation.