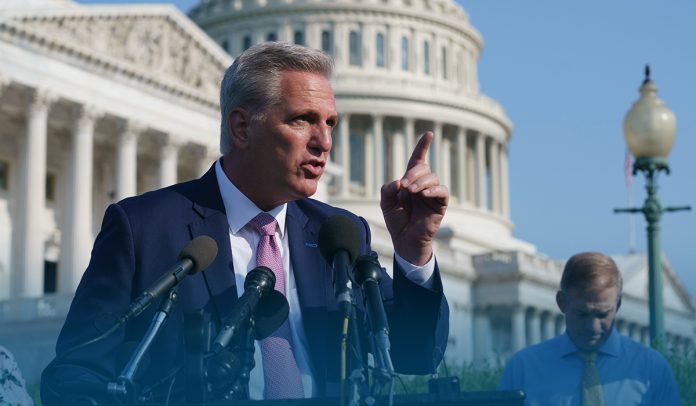 The January 6th Committee inquiring about the deadly 6th JAN Capitol insurrection requested an interview and records from Kevin McCarthy, the U.S. House Minority Leader, on Wednesday, as it continues to seek first-hand information from Congressional members on ex-US President Trump’s actions on that day hundreds of his followers brutally beat police, stormed the Capitol building and interrupted the certification of the 2020 Presidential election.

But McCarthy said late Wednesday that he’s concluded to not cooperate with this House Select Panel, and said that the inquiry wasn’t legitimate and accused the committee of ‘abuse of power.’

Chairman of the Jan. 6 panel Rep. Bennie G. Thompson and the panel are looking for information from the top GOP about the days leading up to the 6th January attack and that day and days following. In addition, Mr. Thompson wants details about reports that House Minority Leader said that Mr. Trump acknowledged some culpability for the ferocity and McCarthy’s backing of continued objections to electoral votes from many US states.

Furthermore, the Mississippi Democrat’s letter to Kevin McCarthy mentions an interview Mr. McCarthy gave to Norah O’Donnell, an anchor of the ‘CBS Evening News,’ during the assault on 6th JAN. She asked if he’d spoken with the then-President, and Mr. Kevin McCarthy responded, he’s talked to Mr. Trump. McCarthy requested Trump to talk to the people to tell them to halt that, adding, “this isn’t who we’re.”

House GOP Leader Kevin McCarthy tells @NorahODonnell he has asked President Trump to talk to the nation and stop the chaos at the U.S. Capitol: “What we’re currently watching unfold is un-American…This is not the First Amendment. This has to stop and this has to stop now.” pic.twitter.com/D56mAVVXQw

Rep. Bennie G. Thompson said in the letter that they also must learn about how the American President’s plans for the 6th January came together, and all the other ways he tried to tilt the election outcomes. For example, in advance of 1/6/2021, “you purportedly explained to the former White House Chief of Staff, Mr. Mark Meadows, and the then-President Trump that objections to the certifications of the electoral votes on 6th JAN were doomed to fail.

Moreover, Rep. Thompson had told the media that he anticipated ‘McCarthy will voluntarily come forward’ after receiving the interview request from the Jan. 6 committee and that Kevin McCarthy will tell them why he made that statement on the floor of the House. Rep. Kevin McCarthy is the highest-ranking Republican officeholder Thompson has requested information from, as the Select Panel investigates last year’s attack. The request of Mr. Bennie Thompson is only voluntary, not a subpoena, and he invited to meet with McCarthy on February 3 or 4.

In the meantime, GOP Congressman Jim Jordan has stated he wouldn’t testify before the panel, following in the footsteps of the former US President and other GOPs who have rejected to acquiesce. Thompson told the media outlet that Kayleigh McEnany, the former White House Press Secretary, met with the committee virtually on Wednesday. Thompson told reporters that the meeting of the panel scheduled for 5 PM might be delayed because the depositions are taking longer than anticipated.