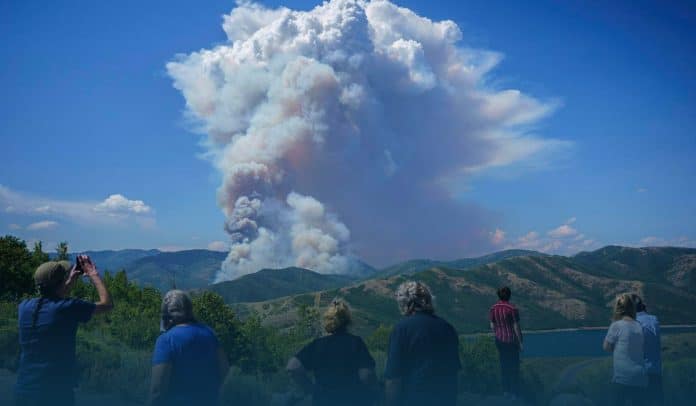 On Monday, firefighters fighting fires in forests of Northern California girded for the latest bouts of windy weather. A utility cautioned numerous customers that it might cut out their power to avoid new fires from igniting if wind gusts damage power lines. Situations that repressed the massive Dixie Fire overnight gave away in the afternoon to robust winds that pushed flames through an area where scorching heat and drought have turned vegetation to tinder.

The fire was only a few kilometers from Susanville, the town in California with a population of about twenty thousand, and ash fell in the area. Moreover, portions of a small nearby mountain community Janesville were ordered to evacuate from there.

David Janssen, the fire spokesman, said that bulldozers had cut fire lines in the way of northward-trending flames, but many of their lines are getting tested then.

Fire officials said that earlier in the day, smoke over the fire had slowed its activity, but breezy winds arrived in the evening, pushing the fire into extreme activity, group tree torching, and rapid propelling spot fires that spread out as much as few miles before fire front.

Janssen said that by the time they get there to fight it, it isn’t not only a quarter of an acre; it already blows up.

Furthermore, the National Weather Service issued a fire weather watch through Thursday in the fire area amid winds that could gust to 45kph at times.

The Dixie Fire, now the 2nd largest wildfire in the history of California, has burned over 2331 square kilometers in the southern Cascades and the northern Sierra Nevada since it ignited on 13th July and finally merged with the Fly Fire.

Continuing damage surveys have totaled over eleven hundred structures, including 625 houses, and over fourteen thousand buildings remained threatened. As a result, several evacuation orders were in effect.

On Sunday night, the Pacific Gas and Electric Company (PG&E) cautioned thirty-nine thousand Northern California customers it might intentionally turn off their power in the upcoming days to lessen the risk of wildfire from energized electric power lines due to wind gusts.