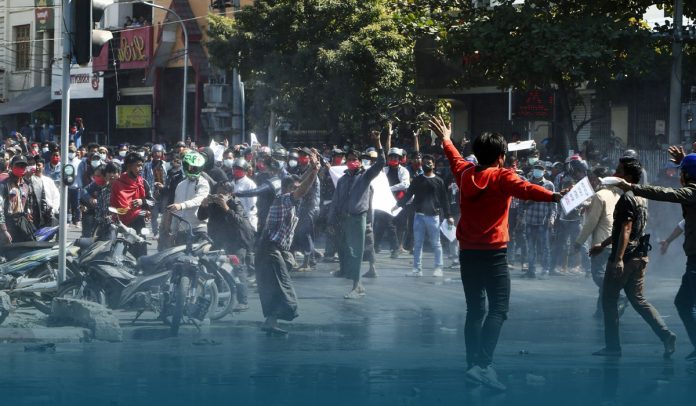 Nyi Nyi Aung Htet Naing, Internet Network Engineer, had posted on Facebook about the increasingly violent military crackdown on pro-democracy protests in Myanmar the day before he was killed.

He wrote ‘#How Many Dead Bodies UN Need to Take Action.’ in reference to the United Nations.

On Sunday, he was among the first shot dead in Myanmar’s biggest city of Yangon, the bloodiest day since the February 1 coup prompted daily protests against the junta and demanded the release of Aung San Suu Kyi (the elected leader).

The United Nations Human Rights Office stated at least 18 people had been killed and 30 injured on Sunday, bringing the total number of protesters killed since the coup to at least 21. The army says one policeman died in the unrest. The authorities didn’t respond to requests for comment on Sunday’s violence.

A spokesperson Ravina Shamdasani stated that the people of Myanmar have the right to assemble peacefully and demand the restoration of democracy. Moreover, the use of lethal force against non-violent demonstrators is never justifiable under international human rights norms.

The protesters remained resistant. Nyan Win Shein told Reuters that if they push them, they’ll rise. And if they attack them, they’ll defend. Moreover, they’ll never kneel down to the military boots.

Amy Kyaw (a protestor) told AFP that police started shooting just as they arrived there. They did not say a word of warning or threat. Some of them got injured, and some teachers are still hiding in neighbors’ homes. Some demonstrators have herded away in the police vans.

Happening on the Ground

The security forces moved to break up a rally in the south-eastern city of Dawei. There are several reports of live rounds being used. Activists told the BBC that 4 people were killed in the town.

The government-run Global New Light of Myanmar stated the army had previously shown restraint but couldn’t ignore ‘anarchic mobs.’ It said that severe action would be inevitably taken against riotous protesters.

Daily strikes and protests paralyzed a state where the army had promised to bring order, police and soldiers intensified their crackdown at the weekend.

The video from an apartment above records the sound of gunshots as Nyi Nyi lies slumped outside the Kamaryut township high school’s gate dressed in a check shirt and with a builder’s white hard hat and hold and his phone in his hand.

The video from Myanmar Now (website) that Reuters republished shows that some protesters sprint past the body before five gain courage to carry him away, crouching as they run.

It was too late to save him.

A United Nations official speaking about anonymous condition said that Nyi Nyi was one of at least 5 killed people in Yangon. Her colleagues said that one had been shot in the eye. A middle school teacher died of a suspected heart-attack from a stun grenade blast.

The teachers tried to assemble early, but police threw stun grenades and charged in to break up the protest.

Moreover, the teacher Hayman May Hninsi said that many were wounded. He has no weapon. He just came there to protest peacefully.

Where is Aung San Suu Kyi?

Myanmar’s civilian leader hasn’t been seen in public since she was detained in the capital Nay Pyi Taw as the coup began. Her followers and many in the international community have demanded her release and the restoration of the November-election result that saw her National League for Democracy party win a landslide.

On Monday, Ms. Suu Kyi faces court proceedings on charges of possessing unregistered walkie-talkies and violating COVID-19 restrictions. But her lawyer says he has been unable to speak to her.

The military leaders warranted the seizure of power by alleging extensive fraud in the elections, claims dismissed by the electoral committee.

The coup has been broadly condemned outside Myanmar, prompting sanctions against the military and other punitive moves.

The protesters wearing plastic work helmets and with makeshift shields faced-off against soldiers and police in battle gear, including some from units notorious for severe crackdowns on ethnic rebel groups in Myanmar’s border areas.

Witnesses said that in Dawei, security forces opened fire on demonstrators in the middle of the road.

The live video and photos shared on social media, not all of which were verified by Reuters, showed medics rushing to retrieve the dead and injured, carrying them away on stretchers, stuffing cotton wool into gaping wounds.

Some held riot shields homemade from a tin sheet and stenciled with the word “PEOPLE” to contrast with those labeled “POLICE.”

Moreover, the protesters wrote their blood group and a contact number for next of kin on their forearms if they were wounded or injured. Until nightfall, demonstrations flared and subsided.

The youth activist Thinzar Shunlei Yi said that young ones are resisting state oppression with anything they have. Thinzar Shunlei added, “We will not let the military rule us again. Never again.”