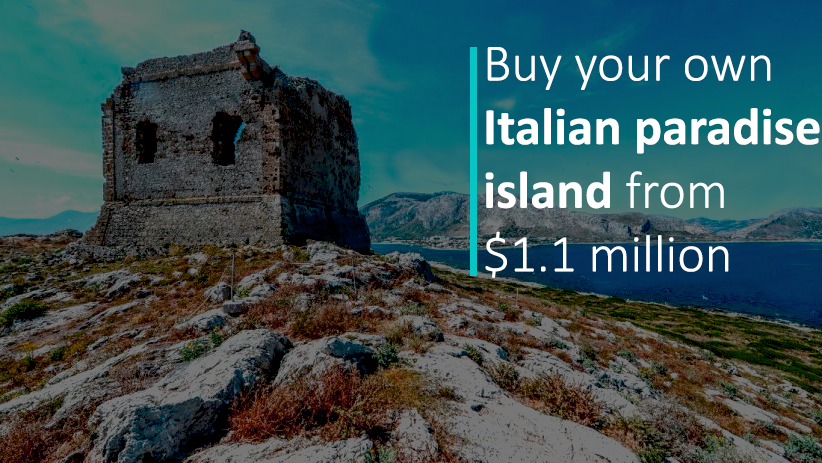 Everybody has a dream to live a beautiful island, and if that island belongs to him, it becomes an extra source of pleasure for him. It is very rare that anybody set his island for sale which belongs to their forefathers. But here is a piece of good news for the people who dream of owning their private island. An aristocratic family is selling their Italian private island in Sicily for less than the actual price of a Manhattan loft apartment or a Tuscan villa. A wild, pristine atoll, Isola Delle Femmine near Palermo with a crumbling stone tower of the 17th century set to sale.

The demanded sale offer is about 1.1 million dollars or €1million. It is an aristocratic family who is trying to sell their family’s island. Like many other families in Italy, this family is also struggling to afford the maintenance of the estates they have had for centuries.

The oval-shaped uninhabited island is part of a marine protected park which at present a snorkeling and an elite scuba spot. Relics and early Roman anchors lie on the nearby seabed. The reef waters of this seabed inhabited by lobsters, madrepora stony coral, and sea anemones. Sunbathing and solo swimming is guaranteed. Before now, the island set for sale on much higher price about €3.5 million but latterly, after no one shows interest to buy the price downed to a flexible range among €1 and €3 million.

Also Riccardo Romolini, the estate agent said that the present owners are ready for offering negotiations. They said that they have interest that they will accept the offer which is close to €2 million. Isola Della Femmine located three-hundred meters from a mainland village named after it. In the past, this Island was similar to a peninsula and linked by an isthmus. The local people living in nearby areas called it as “I’isolotto,” and in English, its meaning is baby isle.

Paola Pilo Bacci is a countess, and from his forefathers, they are the owners of the island since the 1600s. He said that some crazy people use to swim from the village. However, there is usually heavy currents in that narrow area of sea. He added when he wants to take a bath in that area alone or with friends he uses to take a rubber dinghy every time. On the other hand, an artist, Baci shared the childhood memories that she spent her summers on the rocky island. Moreover, her adventures under the water during those times of childhood influenced her to make her paintings more influential in expressing the aquatic life.

Furthermore, she told that she loved diving with her mask to admire corals and the beautiful rocks. Baci also shared the qualities of that water by saying that the water has a magical pull and it is translucent. Besides, the silence and beauty of the isle are delightful. She also described the wave’s sound as resembling it with the crying of seagulls. She put the light on her childhood and said that her elders used the isle as a secret haven where they could delight the sun bliss and the sea far away from the noisy holidaymakers. Though now, the time changed and it is challenging for many aristocratic families to afford the maintenance cost of such estates, especially in the case when heirs relocated and only visit during the vacations.

Paola Bacci said that the territory belongs to her family, but it is rubbish to hold it when you are not using it. It’s better to handover the isle to another new owner who can deserve it to breathe new life including the tower. It is not only for the first time bargain offered for any land in Italy. In the past, many of the Italian villages and towns sell homes as less amount as half of the actual. It happens because the young generation being able to start their professional life, they prefer to migrate to the cities for better future and facilitative life.

There is a long lasting history of the Isola Della Femmine. The ancient Roman and the Greek stone and lime mortar basins one time used to make a pleasure-seeking fermented fish sauce dubbed garum along with old basins and wells to store the rainwater. On a tall grassy hill, the ancient tower rises. Actually, it was a part of a defensive fortresses network to shield Sicily’s coasts from the pirate raids of Saracen. The view of the isle of Ustica from the top stretching is 360-degree.

During the world II the Allied bombed the fortress, and after that, the US Navy used it as a military outpost to patrol the northern coast of Sicily. Romolini said that a re-style could change it into a personal private residence or a lavish place for business events and celebrations. They will welcome if the new buyers of the island come up with a project related development that saves the surrounding nature’s beauty. On the other side, the tower also advertised as a dream location for brands as an advertising tool or fashion shows.

The name of the isle taken from the Italian language and the meaning of the Isola Delle Femmine is ‘Island of women.’ According to some tale tellers, there were thirteen young Turkish women group of actors drifting from their families as punishment for wrongdoing took refuge on the isle after a storm hit their boat. After that, they lived there happily for their remaining life. Pilo Bacci relates the story with some people that they see the girl’s ghost wandering alongside the beach happily, dancing, and singing. However, she said that these are the only stories; no one knows how much truth present behind these stories. The name of the island derived from Latin, and its meaning is an island of the frontier which we can say that a safe haven of a shield from the open sea.

There are about more than 120 species of plants and a good eco-system of birds. Bacci expressed that her grandparents used to tell her about a cattle breeder that rented the isle and every day she takes her cows on a boat to graze openly and eat the fresh plants after then brings them back to the home after the sunset.