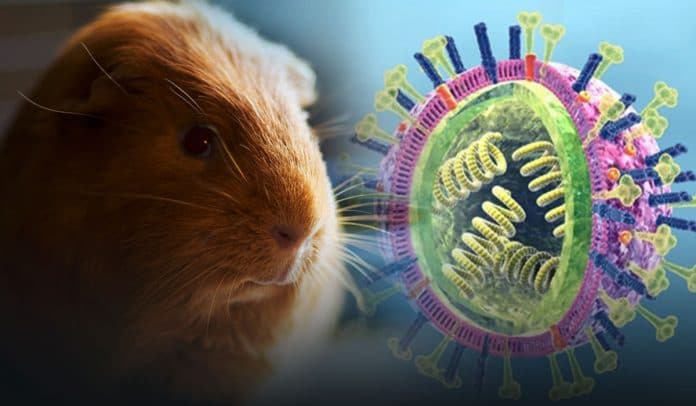 According to a recent study about guinea pigs, air droplets containing the influenza virus may not be the only way to spread the disease. Some viruses such as influenza may also spread by attaching to dust particles, the study said.

The study published in Nature Communications suggests that dust particles, as well as small fibers on contaminated surfaces, might kick up into the air and create germ-laden particles, aerosolized fomites, which may spread some specific viruses such as influenza – the latest study from the Icahn School of Medicine at Mt. Sinai and the University of California, Davis.

1. Scientists show that dust can spread a respiratory virus: study of Influenza virus in guinea pigs shows these animals disperse lots of dust particles by just moving around and the virus can hitch a ride on dust, travel to another cage, and cause new infections… pic.twitter.com/uToQfDxWJa

The research discussed viruses such as influenza virus but obvious consequences for COVID-19 transmission, according to several reports. Professor William Ristenpart of the UC Davis Department of Chemical Engineering and the lead author of the study stated that unexpectedly, his team finds that an uninfected, virus-immune guinea pig (whose body contaminated with influenza virus) might transmit the virus through airborne to a vulnerable partner in a separate cage.

Ristenpart says in a report in Science Daily that it is really shocking to most epidemiologists and virologists that air dust, instead of expiatory droplets, may carry the influenza virus able to infect animals. The professor also states in the report that the understood assumption is always that airborne transmission occurs due to the respiratory droplets produced by sneezing, coughing, or talking.

Transmission through dust opens up overall new areas of investigation with profound implications for how they understand laboratory experiments along with epidemiological research of outbreaks. In the study of guinea pigs, the scientists investigated if small, aerosolized fomites or non-respiratory particles, could bring influenza virus between guinea pigs.

The researchers, while using an automated machine to sum airborne dust particles, found that healthy guinea pigs moving in a cage have the ability to release spikes up to thousand particles in one second. Moreover, the scientists’ team found guinea pigs resistant to influenza with the virus coated on their fur transmitted the virus via air to susceptible guinea pigs.

Therefore, the report said that it discovered that the influenza virus didn’t expel from the respiratory zone to be infectious. The researchers further stated that they further establish that aerosolized fomites might produce from inorganic objects, such as by rubbing a paper tissue manually contaminated with the influenza virus.

On the whole, the researchers state that the information suggests that aerosolized fomites possibly contribute to the transmission of different viruses like influenza in animal models, which may have important but understudies consequences for public health in humans.

Read Also: The US government and Pfizer settle on $1.95 billion deal to make Covid-19 vaccine