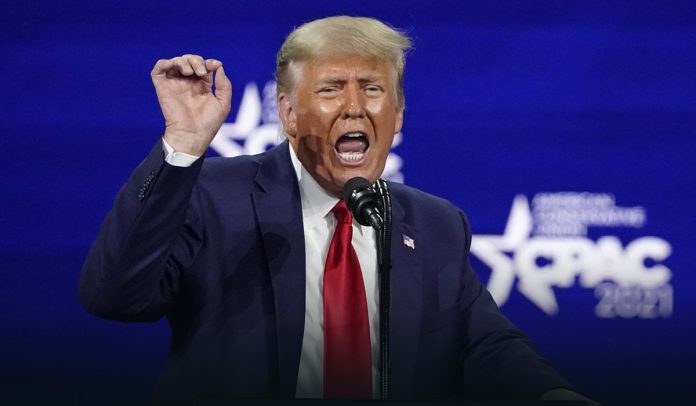 On Wednesday, social networking service company Facebook’s oversight board upheld the company’s decision to ban Donald Trump from posting comments to his Facebook and Instagram accounts, a measure imposed after he posted provocative remarks as hundreds of his followers stormed the U.S. Capitol on Jan. 6.

However, the quasi-independent panel left open the possibility that the former US President could eventually return to the popular website, saying it wasn’t appropriate for the social media company to impose the indeterminate and standard-less penalty of indefinite suspension.

The oversight group gave Facebook executives 6 months to re-examine the ‘arbitrary penalty’ it imposed the day after the rebellion when Biden’s predecessor urged supporters to confront policymakers as they certified Biden’s Presidential election win.

The review said social networking service executives should decide on another penalty that reflects the ‘gravity of the violation, and the prospect of imminent harm.’

Donald Trump reacted angrily to the oversight panel’s decision. He said that free speech had been taken away from the United States President because the Radical Left Lunatics are afraid of the fact. But the truth would come out anyway, bigger and stronger than ever before.

White House offered no response to the panel’s decision

He said that the People of their country wouldn’t stand for it! These corrupt social media businesses must pay a political price and never again be allowed to destroy and decimate their Electoral Process. Moreover, he stated, what Facebook, Google, and Twitter have done is a total disgrace and embarrassment to their country.

The White House offered no response to the board’s decision. Jen Psaki, White House Press Secretary, said that this is an independent board decision. They’re not going to have any remark on the future of the former president Trump’s social media account.

Mr. Trump, now more than three months out of office but anticipating another run for the presidency in 2024, unveiled on Tuesday morning a new website, ‘From the Desk of Donald J. Trump,’ to communicate with his followers. It is seen much like a Twitter feed, with posts written by Donald Trump that could be shared on Facebook, YouTube, and Twitter.

Moreover, during his tenure in the White House, Donald Trump broke new ground with thousands of tweets on matters of the day, endorsements of GOP candidates he favored over those who had criticized him, and acerbic remarks about opposition Democrats.

A letter submitted to the oversight panel on Donald Trump’s behalf asked the board to reassess the Facebook suspension, contending it was ‘inconceivable’ that either of his Jan. 6 posts ‘could be viewed as a threat to public safety, or an incitement to violence.’

The letter also claimed all genuine Donald Trump followers at the U.S. Capitol on Jan. 6 were law-abiding and that outside forces were involved.

Donald Trump had a high level of influence

However, over four hundred people inside the Capitol Hill that day, including many wearing Trump-emblazoned hats and shirts and carrying pro-Trump flags and signs, have been arrested and charged with an array of criminal offenses.

The Board has upheld Facebook’s decision on January 7 to suspend then-President Trump from Facebook and Instagram. Trump’s posts during the Capitol riot severely violated Facebook’s rules and encouraged and legitimized violence. https://t.co/veRvWpeyCi

The oversight board found that the former President’s two posts in the chaos at the Capitol Hill that left 5 people dead severely violated Facebook’s Community Standards and Instagram’s Community Guidelines.

The review panel said that ‘We love You. You’re very special’ in the first post, and ‘great patriots’ and ‘remember this day forever’ in the second post violated Facebook’s rules and regulations prohibiting praise of people engaged in violence.

The panel concluded that as President, Donald Trump had a high level of influence. Moreover, the reach of his posts was extensive, with 35M followers on Facebook and 24M on Instagram account.

Not appropriate for Facebook to impose an indefinite ban

The panel said that given the consequence of the violations and the ongoing violence risk, Facebook was justified in suspending Trump’s accounts on Jan. 6 and extending that suspension on Jan. 7. It was, however, not appropriate for Facebook to impose an indefinite ban.

Facebook CEO Mark Zuckerberg said in a Jan. 7 statement that his decision to use his social platform to condone rather than condemn his supporters’ actions at the US Capitol building has rightly disturbed US people and worldwide. Moreover, they removed these statements yesterday because they judged that their effect, and likely their intent, would incite further violence.

The twenty-member review board was composed of legal scholars, journalists, and human rights experts. A 5-member panel prepared a decision, which had to be approved by a majority of the entire board, and which media platform was then required to implement unless the action could violate the law. The panel says its assignment is to answer some of the most challenging questions around freedom of expression online, what to take down, what to leave up, and why.

The Facebook Oversight Board was created in October 2020; after the social media company faced criticism, it wasn’t quickly and effectively dealing with what some feel has been challenging content.

The panel announced its first decisions in January, supporting its decision to remove the content in one case, but overruling the social media company and ordering it to restore posts in four other cases.