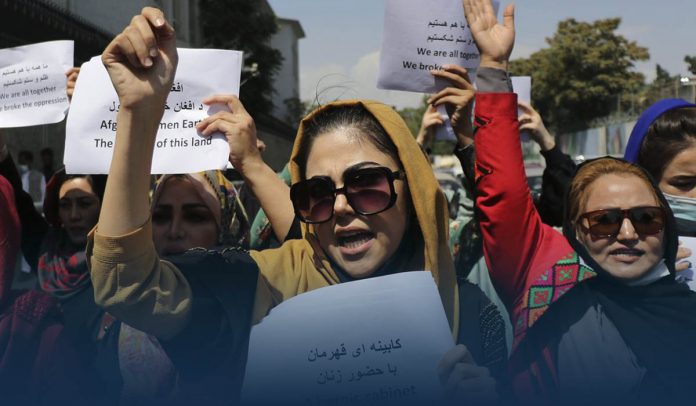 On Friday, a group of Afghanistan women demonstrated close to the ARG Presidential Office in Kabul, demanding equal rights from the new rulers of Afghanistan, the Taliban, as they work on the formation of the government and seeking global recognition. The Taliban have pledged an inclusive administration and a more moderate form of Islamic rule than what they ruled from 1996-2001. However, several Afghani people, particularly women, are greatly doubtful and fear a reversal of rights gained over the last twenty years.

The Afghan Taliban gained control over most of Afghanistan in only a few days in August and celebrated the withdrawal of the last American troops after two decades of war. Now they experience the crucial dare of governing a strife-torn country that’s hugely reliant on global assistance.

Kabul’s protest was the second demonstration by women, with the first one held in Herat city. Nearly twenty women holding microphones gathered under the vigilance of Taliban shooters, who permitted the protest to proceed.

The small group of women demanded access to education, a part in governing the country, and the right to return to work. One of the signs read that freedom is their motto, and it makes them proud.

One of the Taliban fighters moved into the crowd, but witnesses said he was annoyed with the passer-by who had stopped there to observe the protest and not the demonstrators themselves.

Let me be clear: We will continue to support the Afghan people through diplomacy, international influence, and humanitarian aid.

We will continue to speak out for basic rights of the Afghan people — especially women and girls — as we do around the world.

Stephane Dujarric, the U.N. spokesman, said that they’re concerned about the human rights issues in Afghanistan, especially women’s rights. For example, women must have the right to work in a safe environment. Moreover, the Taliban have stated that women would be free to continue their work and education outside the home. However, militants have also pledged to impose Islamic law without providing details.

A quite possibly more critical concern for the country’s new rulers is the economy, which is broiled in crisis. Civil servants haven’t received their remunerations, ATMs have been closed, and banks ate restricting withdrawals to two hundred dollars weekly.

The armed group said that the Western Union, which stopped service after the Taliban captured the Afghan capital Kabul, would resume its service, which might help Afghani people to receive payments from relatives living out of the country. However, there was no immediate remark from Western Union on service resumption.

A spokesman for Taliban’s cultural commission, Ahmadullah Muttaqi, said that on Friday, a top official from U.A.E flew into Hamid Karzai International Airport to meet with Taliban leaders. TOLO TV reports that airplane was carrying sixty tons of nourishment and medical assistance.

Some Afghani female nationals are already staying at their homes because of fear for their safety, and several families are purchasing full-body veils for female relatives.