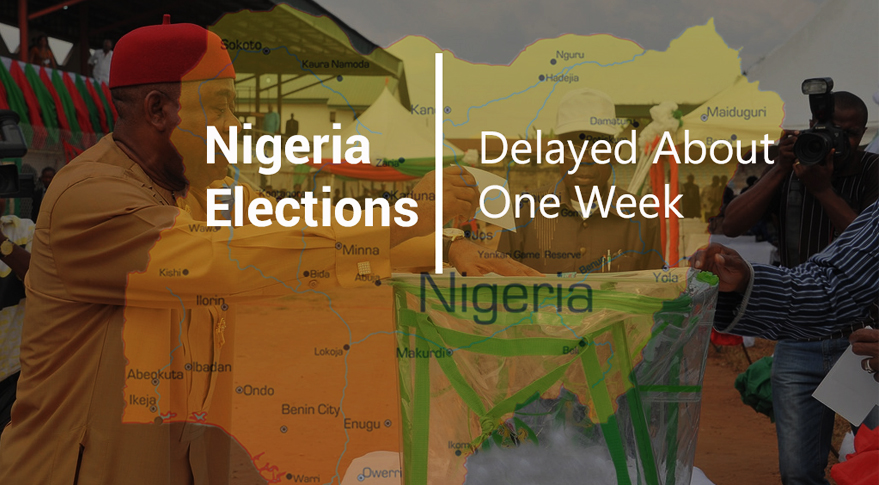 The Nigerian electoral authority decided to delay the national assembly and presidential elections for one week. On the other hand, both key Nigerian political parties condemned the electoral authority’s decision. According to the authorities’ statement, the due date of the elections was 16 February 2019 whereas after their decision they will be held on 23 February.

(INEC) Nigeria’s Independent National Electoral Commission’s chairman, Mr. Mahmood Yakubu stated in a news conference that after the careful evaluation of the implementation of the operational and the logistics plan, also for the conduction of fair, free and credible elections, the commission decided to reschedule the polls after one week.

Furthermore, Yakubu expressed that for the commission it was a difficult decision to take, but it is essential for the delivery of elections in a more successful way and the consolidation for the democracy of the country. INEC said that state House of Assembly and area council’s governorship elections are pending until 9th March 2019.

The Reaction of Political Parties

Nigerian both ruling All Progressives Congress (APC) and the opposing People’s Democratic Party (PDP) blamed each other for the electoral delay to attain advantages.

Muhammadu Buhari’s Presidential Campaign Council stated in an announcement that they condemn the election’s postponement, but also they urge their party supporters to stay determined and patient. He further told that he had fully cooperated with the Nigerian Independent National Electoral Commission and council expected that the commission ensured neutralism and imperialism in the whole process and it will not collide with the PDP.

Read Also: State Board will hear the Election Fraud Case in North Carolina

Besides, the ruling party also accused that the People’s Democratic Party was not ready for this elections. They want to create new strategies to take over the general elections.

On the other side, Atiku Abubakar the opposition candidate of the PDP states that Buhari’s administration has had plenty of money and time to get ready for these elections, but he is accusing his opposition of the delay in elections. They were trying to ensure that the turnout of votes will low on the new announced electoral date.

He enforced his supporters and voters to come out from their homes in bulks on 23rd February to desperate the APC and ensure to do anything against their power to reject the formal ruling party. He quoted to APC that they may postpone elections, but they cannot delay the destiny.

The build-up to Elections Violence

These elections postponement will lead the elections to violence, due to which warnings frequently given by the US and the British governments that they would cancel the visas and investigate those people who founded inflaming violence during the elections.

President Buhari’s actual competitor is Abubakar who is a former vice president and business tycoon, and Buhari is fighting against seventy-one other presidential candidates. The Nigerian Electoral comes in a critical time for its economy and has importance for the region. The recent crash of oil prices sent Nigeria’s economy into chaos when the $40 barrel oil price moved to $100. Due to this overall situation, the Nigerian primary revenue source drowned. According to The Brookings Institution, about 87 million Nigerians are now living in poverty. And it is the highest percentage of impoverished in the world.