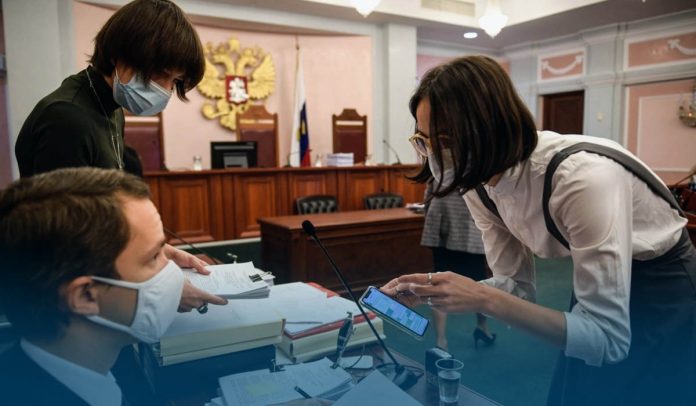 On Thursday, a Russian prosecutor called on Russia’s Supreme Court to abolish the International Memorial Society, one of Russia’s most prominent rights groups, part of a months-long crackdown on all such groups – independent media, activists, and opposition followers – in the country. Few hours into the hearing, the Court decided to adjourn until 14th December.

Earlier in November, the Prosecutor General’s Office petitioned the Russia’s SC to revoke the lawful status of Memorial that rose to prominence for its studies of political suppression in the Soviet Union and now involves over fifty smaller groups in the country and abroad.

The International Memorial Society and its followers have maintained the allegations are politically motivated.

We, the Presidents of #Poland, #Lithuania, #Latvia and #Estonia express our concern regarding historical revisionism in #Russia and specifically the possible closure of #Memorial.

The International Memorial Society is well-known for researching and honoring the Soviet-time executions and captivity of dissidents. Its human rights wing, Memorial Human Rights Centre, exposed the existing abuses by authorities in Russia and played an essential role in uncovering military atrocities during the Chechen wars.

Under President Vladimir Putin’s tightening authoritarian rule, Memorial has been pressurized for several years, but the bid to close it down shocked international human rights advocates and observers of the country. Moreover, the organization’s both wings have been proclaimed ‘foreign agents’ and must meet heavy requirements, including putting ‘foreign agent’ caution on all published things and hard reporting rules on finances.

In court for alleged accusations of its designation as a ‘foreign agent,’ Memorial (society) is experiencing its major threat since being founded in 1989 by Soviet dissidents, including Nobel Peace Prize laureate Andrei Dmitrievich Sakharov.

Memorial, a pillar of Russian civil society, has built up a considerable archive of Soviet-time crimes and campaigned untiringly for human rights in the country. On Thursday, Russian media reported that prosecutor Dmitry Vagurin accused the Memorial Society of intentionally and systematically hiding its foreign agent status by failing to tag all items with the necessary labels.

In addition, he argued that liquidating the rights groups was a proportionate measure. Memorial argues it has taken energetic efforts to meet the requirements. The prosecution argued Memorial society violated the freedoms and rights of nationals, specifically the right to freedom of information.

Grigory Vaipan, the Memorial advocate, told the court that prosecutors had found an immaterial share of Memorial’s materials that didn’t carry the label.

Tanya Lokshina, the spokeswoman for Human Rights Watch, recently called the measure to shutter Memorial a contemptable attack on the jugular of Russian civil society, and European envoys have articulated their alarm.

Furthermore, it comes in a year that has seen an unparalleled crackdown on opponents of Russian President Putin, including the jailing of Alexey Navalny, a top Kremlin critic, and the banning of his organizations.