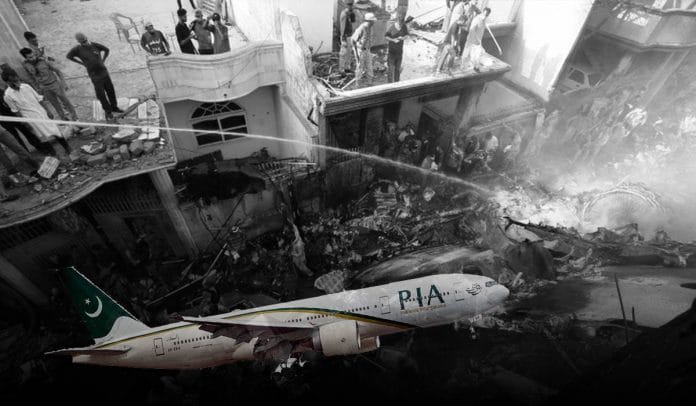 According to the Sindh Health Department, at least seventy-six people killed after a Pakistan International Airline (PIA) passenger aircraft crashed on Friday in Karachi, the largest city of Pakistan. According to Pakistan’s Aviation Ministry, there were ninety-one passengers and eight crew members on board in the unlucky plane of PIA. The flight PK8303, an Airbus A320, was flying from Lahore, the capital city of Punjab to Karachi, the capital city of Sindh. The plane crashed in the residential area near the airport.

At least 76 people have been killed after a Pakistan International Airlines (PIA) flight crashed Friday in the southern Pakistani city of Karachi, according to a statement from the Sindh Health Department. https://t.co/wkyiGY8cMj

The CEO of PIA said in a news conference that the pilot attempted one landing, but due to the technical fault in the landing gear, he failed to land. He flew the plane after an unsuccessful attempt, but unfortunately, the aircraft lost its engines, and the pilot issued a mayday call. Two lucky passengers, including President of Bank of Punjab, Zafar Masood, survived the fatal crash. Another survivor Muhammad Zubair described his ordeal and recalled how he lost consciousness and then woke up to smoke and to scream of people, and then he rushed towards a light area to save his life. One air hostess after missing the flight, also luckily saved her life while staying at home.

The Cause of the Crash

So far, the actual cause of the crash is unknown. The flight was approaching Jinnah International Airport at around 02:30 p.m. local time (09:30 a.m. GMT). The ground staff allowed the plane to land, but the pilot decided to abort and take round for the second attempt. A civil official told Reuters due to some technical fault the plane didn’t lower its undercarriage. Images of engines shared on social media show scorch marks under both engines, without undercarriage. 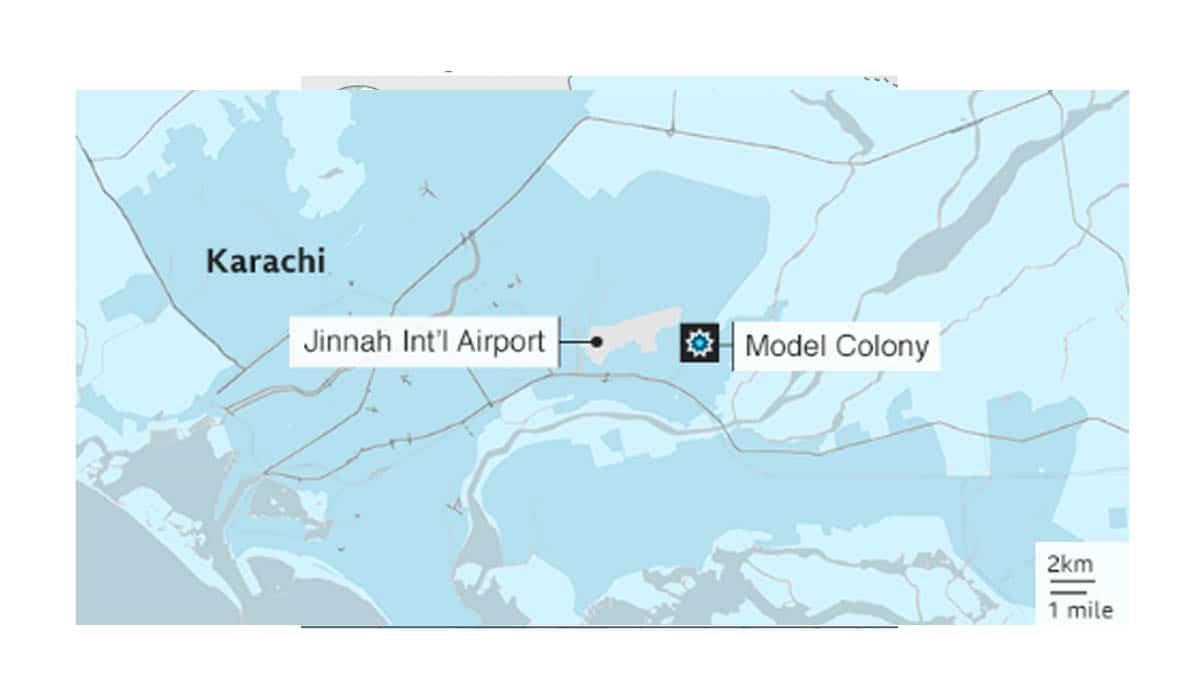 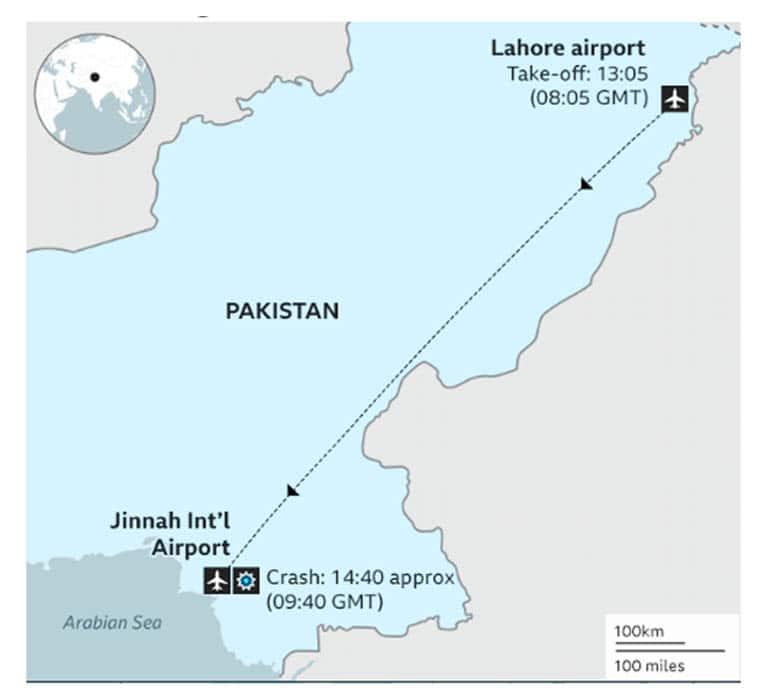 Pakistani media agencies published the supposed conservation’s audio between the pilot and air traffic control for the second attempt, in which the pilot said that the plane lost engines. Furthermore, an air traffic controller staff asks whether it is going to carry out a belly landing of the plane to which the poor pilot replies, “mayday, mayday, mayday” – the final message from the plane.

According to the survivor, Zubair, there were about ten to fifteen minutes between the landing first attempt and the crash. No one among the passengers knew that the airplane was going to crash, the pilot was flying the plane in a very smooth manner. However, the investigators will try to retrieve the recorders of the black box to help determine the actual cause of the crash. The authorities set up a committee of investigation for this purpose.

PIA officials said that the Plane joined the fleet in 2014 and passed its yearly airworthiness inspection in November 2019. 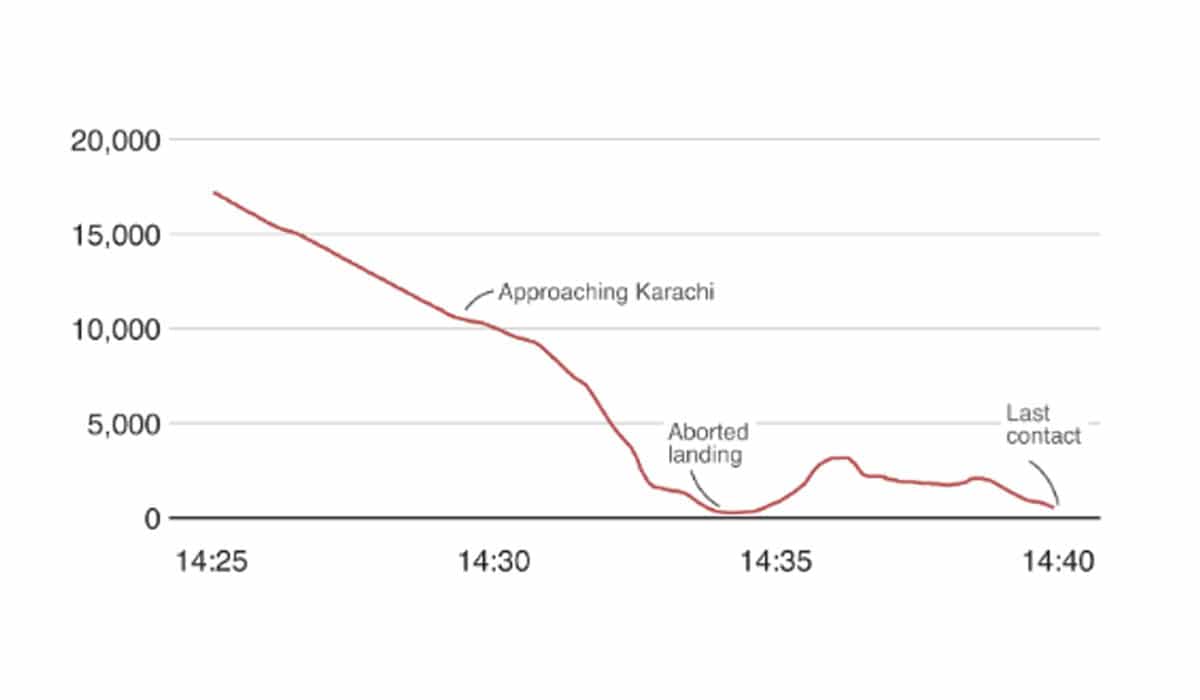 The crash happened a few days after the government of Pakistan, allowing commercial flights to resume after a prolonged lockdown amid coronavirus pandemic. Muslims across Pakistan are preparing to celebrate Eid-ul-Fitar, a religious festival of Muslims, with many citizens traveling back to their homes in cities and villages through air and road travel means.

The unlucky small passenger plane was only a few meters from the runway boundary when it hit houses in the Model Colony residential area. Television footage showed rescue teams searching through debris scattered around the nearby streets of the densely populated zone. After the cars, several cars in the area set on fire.

📹| Footage shows plumes of smoke rising from the site of the crash after a passenger plane crashed in Karachi.

Ambulances and rescue personnel arrived at the scene to help residents. An emergency was declared in all major hospitals of Karachi, according to officials. pic.twitter.com/dZTmhYIY9x

Survivor Zubair suffered only minor injuries and said that after the opening eyes, he listened to screams of kids and adults from all directions and saw the fire. He could not hear people – just hear their screams. He added that he opened his seatbelt and saw some incoming light, and he follows that path to go out. Zubir jumped down around three meters (ten feet) to save his life.

WATCH: Security video footage shows the Pakistan International Airlines passenger plane as it crashed in Karachi Friday. PK 8303 went down with 91 passengers and 7 crew on board https://t.co/OuFskZrFZy pic.twitter.com/rFmbDwyzy8

Eyewitness Muhammad Uzair Khan told news channels that he went outside his home after hearing a massive sound of the blast. The plane hit homes almost his neighbors, and the whole this was too horrible to explain.

About casualties of the crash

Health officials of two local hospitals, the Civil and Jinnah hospitals, shared death tolls to Pakistani and international media, adding almost seventy-six confirmed deaths. However, the real death figure is still not clear because many people still stuck under the buildings’ debris. Both lucky passengers were sitting at the front seats of the plane. Ansar Naqvi, the senior journalist at local news channel “24 News” and Khalid Sherdil, former head of the Provincial Disaster Management Authority (PDMA) of Punjab, were also traveling in the flight.

The safety record of Pakistan’s aviation

Pakistan, with a mixed aviation safety record, experienced several airliner crashes.  An aircraft of private airline Airblue crashed on Margalla Hills near Islamabad in 2010, killing all 152 people on board, the deadliest air crash in the history of Pakistan. Similarly, a Boeing 737-200 of Bhoja Air crashed in 2012 due to bad weather on its way to land in Rawalpindi, killing all 127 people on board. Furthermore, a PIA airliner burst into flames while traveling from northern areas of Pakistan to Islamabad, killing all forty-seven onboard passengers and crew members.

After the incident, Imran Khan Niazi, the Prime Minister of Pakistan, twitted that saddened and shocked because of the PIA crash. He ensured his continuous contact with Arshad Malik, the CEO of PIA, and with the rescue and relief teams on the ground for quick rescue and other future aid activities. He ordered an immediate inquiry of the crash and showed his condolences and prayers with the families of the deceased.

Shocked & saddened by the PIA crash. Am in touch with PIA CEO Arshad Malik, who has left for Karachi & with the rescue & relief teams on ground as this is the priority right now. Immediate inquiry will be instituted. Prayers & condolences go to families of the deceased.

Mian Muhammad Shehbaz Sharif, the leader of opposition in the National Assembly of Pakistan, also showed his sorrow after the crash on his official Twitter account. Sharif wrote, heartbroken at the loss of several precious human lives in a PIA plane crash in Karachi. He prayed for the dead and their families by saying that May Allah rests the deceased souls in peace and give patience to the grieving families. He also prayed for the quick recovery of the injured people.

Heartbroken at the loss of precious human lives in a PIA aircraft crash. May Allah Almighty rest the departed souls in peace & give Sabr to the bereaved families. May those injured recover soon including a very dear colleague of mine. Ameen!

Narendra Modi, the Indian Prime Minister, took Twitter to sincere commiserations over the tragic plane crash. He said, deeply saddened with the loss of many lives in the PIA plane crash in Pakistan. Also, he shared his sympathies to the families of the deceased and wished a speedy recovery to injured.

Deeply saddened by the loss of life due to a plane crash in Pakistan. Our condolences to the families of the deceased, and wishing speedy recovery to those injured.

The U.S. Secretary of the State

The United States Secretary of the State, Mike Pompeo, also showed his grief on Twitter on the sad incident of the plane crash. He said that saddened and shocked to hear the Pakistani plane crash in Karachi. Pompeo prayed for the dead, killed, and their families. He assured that the United States stands with Pakistan during this tragic difficult time.

Pleasure speaking with Turkish Foreign Minister @MevlutCavusoglu today about U.S.-Turkey cooperation to counter COVID-19. We will continue to bring Turkish and U.S. citizens to their home countries, cooperating on supply chain issues, and @NATO Alliance efforts.

Justin Trudeau, the Prime Minister of Canada, also offered his sympathies on the deadly crash. On Twitter, he says that Canadian people were keeping Pakistanis in their prayers and thoughts. The crash news from Pakistan is devasting. Their heart goes out with the families and friends of those who lost their lives in the crash, and everyone affected in the result of this tragedy.

The news from Pakistan this morning is devastating. To the families and friends of those who lost their lives in the crash of PK 8303, and to everyone affected by this terrible tragedy, our hearts go out to you. Canadians are keeping you in our thoughts today.

Ashraf Ghani, the President of Afghanistan, also offered his sincere condolences to the people and the government of Pakistan. He said his heart went out with the victims’ families who lost their precious lives in the Karachi plane crash. Also, he assured that the people of Afghanistan stand with Pakistanis in this moment of grief.

My heart goes out to the families of victims who lost their lives in the PIA plane crash in Karachi. I offer my sincere commiserations to the people and the government of Pakistan. Afghans stand with you in this moment of grief.

Mevlut Cavusoglu, the Foreign Minister of Turkey, also offered his condolences to Pakistan over the PIA crash. He tweeted that deeply saddened by the plane crash in brotherly Pakistan. Cavusoglu prayed that May the mercy of Allah upon those who didn’t survive in the crash. He shared Turkish condolences to Pakistani brothers and sisters. Moreover, the Turkish Foreign Minister adds by saying that brotherly and friendly Pakistan’s pain is their pain.

Deeply saddened by crash of plane close to Karachi Airport in brotherly #Pakistan. May Allah’s mercy be upon those who lost their lives in the crash. Condolences to our Pakistani brothers&sisters. Friendly&brotherly Pakistan’s pain is our pain. 🇹🇷🇵🇰 @SMQureshiPTI

The Chinese Embassy in Pakistan also shared their solidarity on Twitter with Pakistan. The embassy added that they heard with a heavy heart the plane crash near Karachi Airport. Their heart goes with the families of those people who lost their loved ones in the crash. China stands with Pakistan in this sad time.

We learned with heavy heart the PIA plane crash close to Karachi Airport. Our hearts go out to all families who lost their loved ones today. We stand with Pakistan in the time of sadness!

Similarly, many other world leaders showed their sympathies and condolences with the people and government of Pakistan on the Friday horrible passenger plane crash.

Imran Khan Thanked the world leaders for their condolences and support

Khan took Twitter to thank world leaders for reaching out to commiserate over the tragic incident and loss of precious lives. He said that the people of Pakistan value this support and solidarity in their hour of grief.

I thank world leaders for reaching out to condole over the tragic air crash and loss of precious lives. The people of Pakistan value this support and solidarity in our hour of grief.