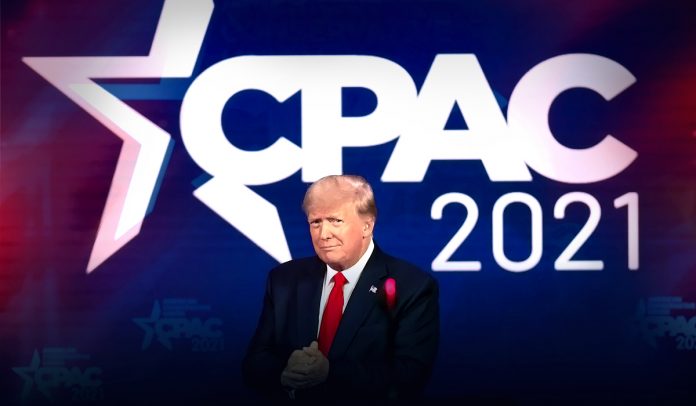 Former U.S. President Donald Trump returns on Sunday to the political stage determined to show that he is still a significant force in the United States and ready to purge his critics within the Republican Party.

Donald Trump will address the biggest annual gathering of grassroots conservatives in Orlando, Florida, immediately after a poll is likely to show he is most attendees’ first choice for the GOP nomination in 2024.

Donald Trump’s son, Don Jr., told the Conservative Political Action Conference (CPAC) that they’re looking forward to Sunday. He imagines it won’t be what they call a low-energy speech. Moreover, he assured attendees that it would solidify Donald Trump and all of their feelings about the ‘Maga (Make America great again)’ movement as the future of the Republican Party.

Although it will take years for the 2024 race to fully take shape, this year’s CPAC offered a window into a Republican primary dominated by a new GOP Party built around the criticisms that animated Mr. Trump’s campaigns and his presidency.

Sen. Bill Cassidy, who was one of 7 Republican Senators to vote to convict Mr. Trump as his second impeachment trial for inciting the deadly insurrection at the Capitol on January 6, told CNN on Sunday morning that he didn’t think Donald Trump would be the party’s 2024 presidential nominee. Moreover, he cautioned that if they idolize one person, they will lose.

The conservative channel Fox News predicted Mr. Trump would declare the Biden presidency the most disastrous in its first month of any in modern history.

The speakers embraced Donald Trump’s lies about the rigging of the November 3 election. The organizers built 2021’s event in Trump’s adopted home state around the theme of liberal ‘cancel culture’ in the wake of Trump after his ban from social media platforms. Additionally, the crowd booed reminders to wear face-masks, much like Donald Trump eschewed his own health experts’ recommendations.

Bob Paxton of Ocala, Florida, told CNN that there is nothing he can say that can make him change his mind.

Red ‘Make America Great Again’ hats and pro-Trump paraphernalia have been ubiquitous, and every attendee who spoke to CNN said they would support Donald Trump if he decides to run in three years. The unofficial, systematic efforts to generate buzz for Republican presidential candidates that were a hallmark of CPACs during the Obama-era were nowhere to be found in 2021.

After a speaker has ostentatiously promised their loyalty, the speaker implies that the genie can’t be put back in the bottle. A Republican senator for Texas, Ted Cruz, told attendees on Friday to let him tell that Donald Trump ain’t going anywhere.

Whereas, many at CPAC have promoted Trump’s baseless claims that the 2020 presidential election was stolen, arguing that they justified new voting restrictions. Sen. Josh Hawley of Missouri proudly defended his vote to challenge the Electoral College result just hours after the January 6 insurrection.

In Washington, Mr. Hawley has faced backlash over his efforts on January 6, and the day pro-Trump protestors encouraged by the former President’s speech stormed the Capitol building. But the residents of Orlando treated him as a hero.

Sen. Hawley said, to the loudest cheers of the day Friday, that he isn’t going anywhere. He is staying right there. He is going to stand up.

At CPAC-2021, Republicans who have broken with Donald Trump, such as Nebraska Senator Ben Sasse and Utah Senator Mitt Romney, and those on ambiguous terms with the former President, including former VP Mike Pence, who rejected Mr. Trump’s pressure to try to tilt the election outcomes, and former U.N Ambassador Nikki Haley, who has offered tempered criticism, were not on hand.

President Joe Biden dropped the “Mr.” in front of the name of its famous “Potato Head,” sparing the gender-neutral name. However, none of the prominent speakers attempted to make a detailed case against Joe Biden’s $1.9 trillion plan to combat the COVID-19 pandemic and stimulate the economy that passed the House early Saturday morning.

The first speaker to attack Joe Biden at length was Kimberly Guilfoyle, the girlfriend of Trump’s son Donald Trump. Jr., well after most 2024 prospects had spoken Friday. And while Trump Jr. used his speech to criticize Mr. Biden, he also aimed at Trump’s rivals within the Republican Party. Additionally, he hammered Wyoming Rep. Liz Cheney, the No. 3 House Republican who voted to impeach Donald Trump after the January 6 riot, in personal terms with reference to Cheney’s father, former Vice President Dick Cheney, shooting a friend in the face in a 2006 hunting accident.

Trump Jr. said that Liz Cheney and her politics are only slightly less popular than her father at a quail hunt.

To the extent policy was discussed, it often focused on Trump’s priorities. Combatting the rise and reach of ‘Tech giants,’ enacting hard-line immigration policies, and talking tough on China.

Sen. Rick Scott, who chairs the Senate Republicans’ campaign arm for the 2022-midterm elections and has been a staunch Trump ally, made clear that he is unwilling to wade into primary fights between those in the party who have criticized the former President and his allies.

Scott, like Hawley, also hammered tech firms, characterizing Twitter’s decision to ban Trump as ominous for all conservatives even though Twitter banned Trump for tweets that glorified and incited violence, not for expressing political opinions.

Moreover, he added if they can silence a former President, ‘what makes you think you’re not next?’

But whether Trump, 74, can or will go for the White House race in 2024 is uncertain. Whereas, the Manhattan district attorney’s office in New York took possession of eight years’ worth of his tax returns this week and other financial statistics as it investigates his business empire.

A Trump critic and former GOP congressman, Joe Walsh, predicted a rousing reception for him on Sunday. It all depends on his health. Whether Mr. Trump is in jail or a gazillion dollars in debt? However, assuming that he is not indicted, if he wants to run, it’s his. Joe Walsh does not think any Republican will challenge him.