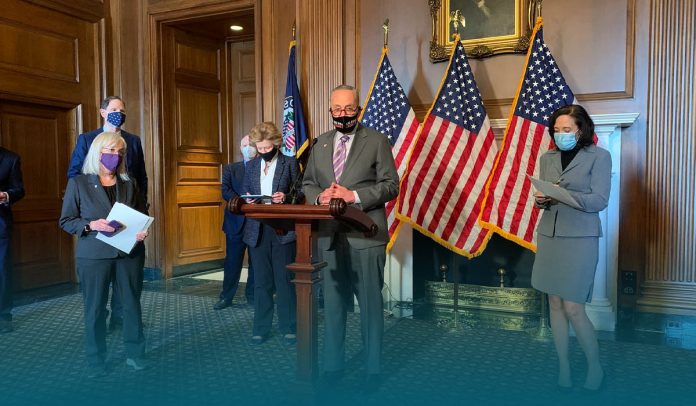 Former President Donald Trump’s second impeachment trial may be the talk of the U.S. but a few people, at least, are silent so far, for very different reasons, even Trump himself, and his successor, President Biden.

The trial’s opening in the U.S. Senate on Tuesday is unprecedented and could affect the political landscape for years to come.

Six GOP senators joined all Democrats in asserting the Senate’s jurisdiction even though Trump is no longer in office. The 56-44 vote sets the phase for several days of presentations from both sides on the facts of the case, which are to commence on Wednesday.

Sixty-seven votes will be needed to convict Trump, meaning at least seventeen Republicans would need to join all 50 Democrats. Some Republicans have indicated they likely would vote guilty.

Biden’s focus on curbing the deadly COVID-19 and the economic fallout right three weeks after moving into the White House, depicts the message clarity for Biden.

Moreover, the weird situation should help reinforce the image of a leader who has no time to waste on the debates about whether the whole process is even constitutional.

As the impeachment trial gets under way, the White House has scheduled a working meeting for the business leaders and veteran Democrats on how to set the world’s largest economy back on track.

Since his inauguration on January 20, Biden has hardly mentioned his predecessor and responds concisely to any questions about the GOP.

For Trump discretion is also the key word, as he has been at his Mar-a-Lago resort in Palm Beach, since leaving Washington D.C. on January 20. He has been deprived since the waning days of the presidency of his ‘the favorite Twitter account’.

However, Trump could have taken advantage of other communication ways, such as prerecorded video messages, which he used often at the troubled end of his 4-year.

But staying quiet and letting his attorneys do the talking has clear benefits. While his acquittal seems nearly certain, with a vast majority of GOP senators voting to try to prevent the trial from even happening, any misplaced word from Trump could throw a spanner in the works.

Mentioning his advisors, Mr. Trump has understood the value of speaking less frequently, after 4-years in the office of extensive media exposure. One of his advisors said that Trump finally understands less is more. Watching the trial from afar at his waterfront club should afford Trump a chance to see just how much influence he still has over the GOP.

The Republican party has several blocs, one of them, committed in their support and wish for him to run in 2024. Secondly, those ready to turn the page. And the last group included numerous but low-profile persons, ready to move on but also afraid to say it out loud for fear of losing voter support.

A year ago, following his acquittal in his first impeachment trial, he was successful. He entitled his appearance in the White House a celebration, taking a victory lap and praising all the GOP legislators who supported him.

The CBS/YouGov survey published on Tuesday results in 56% of those said they wanted to see Trump convicted of inciting violence in connection with the January 6 riot at the Capitol building.

Read Also: Trump’s Impeachment: First president in US history to be Impeached Twice