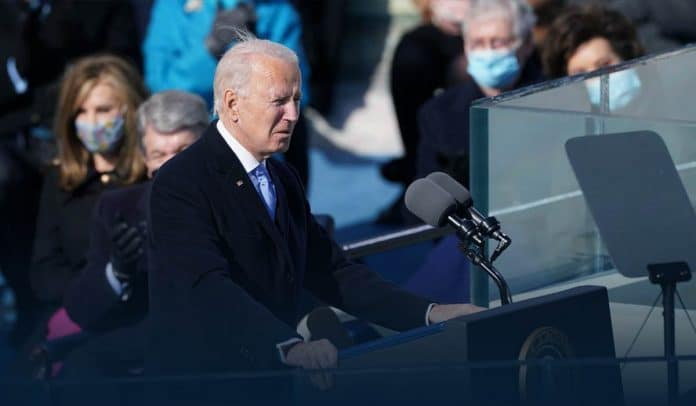 Joe Biden, sworn in as the 46th US president on Wednesday, January 20. Biden and Kamala Harris took the oath of office from the West Front of the US Capitol in a ceremony with no public attendance amid security concerns. Kamala Harris became the first female, black vice-president, the first person of South Asian descent, and the first African-American to be sworn in.

The National Mall, facing the Capitol Hill, was decorated with around 200000 flags to signify the absent crowds.

President Joe Biden has taken over the official @POTUS Twitter account, telling users he is heading to the White House’s Oval Office.

There is no time to waste when it comes to tackling the crises we face. That’s why today, I am heading to the Oval Office to get right to work delivering bold action and immediate relief for American families.

The Pentagon authorized a maximum of 25000 National Guard troops on January 15 to safeguard the US capitol Hill. National Guard members steadily increased in the days leading up to the inauguration day.

President Donald Trump departed the White House on Wednesday morning for the last time during his tenure and became the first president ever not to attend his successor’s inaugural ceremony.

Joe Biden pointed out that novel coronavirus silently stalks the state. Moreover, Covid-19 has claimed more than 400000 American lives since its inception, shifted to the economic dip caused by the pandemic, and addressed the call for racial justice.

Joe Biden declared the January 6’s presidential change as an America’s victory for the cause of American democracy. He said that democracy is precious and fragile. Moreover, Biden noted that democracy had succeeded today.

In Biden’s first speech as president, he said the American story depends not on anyone but all American people. Moreover, he said the nation would press forward with speed and urgency.

The New York Times defined Biden’s speech as a direct rebuttal in tone to Mr. Trump’s inaugural address (in which Mr. Trump spoke of American carnage). As Biden called for an end to the uncivil war of demographic, political, and ideological American cultures through a greater embrace of diversity, the American people must open souls instead of hardening their hearts.

In the speech, President repeated his campaign pledge to fight as hard for those who didn’t support him as for those who supported. Meanwhile, he expressed his opposition to politicians who seek to gain from its weaponization. He showed a passive reference to Donald Trump, who often made false statements while being in office. Biden stated that the dream of justice for all would be delayed no longer.

Joe Biden openly criticized white supremacy and nativism, calling them an ugly reality of American life that clouds the American ideal set out in the US Declaration of Independence, that “all Americans are equal.”