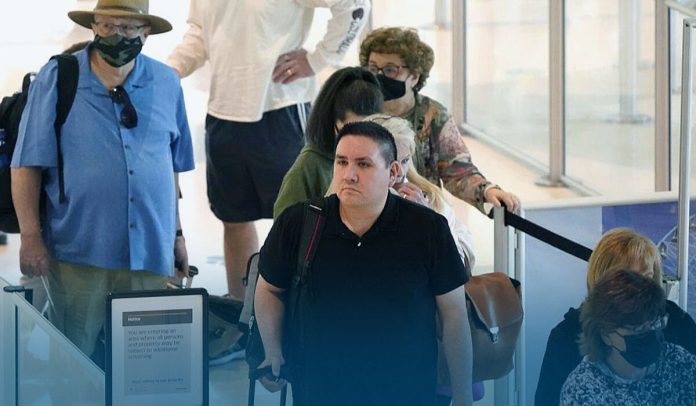 The polling by Associated Press-NORC Center for Public Affairs Research showed that many Americans keep supporting a face-covering mandate for those traveling on an airplane and other shared mobility. But, at least for now, a ruling by the U.S. federal judge has put an end to the rule that Americans use face masks on public transportation and airports and airplanes.

The AP-NORC survey shows that in spite of the resistance to that mandate, which included physical violence and emotional abuse against airline stewardesses, fifty-six percent of those polled supported the use of masks on airplanes and mass transits. However, 24 percent opposed the requirement, while twenty percent remained neutral.

The AP-NORC poll interviews were conducted from April 14 to April 18, just before a Florida judge voided the national face-mask requirement on planes and public transit. Airports and planes immediately discarded their rules that travelers use masks, and the Transportation Security Administration (TSA) stopped imposing the face mask mandate. But on April 20, the U.S. Department of Justice stated that it was filing an appeal to reverse the order by the federal judge.

That notice appeared minutes after the US federal health agency CDC requested Justice to appeal the order, saying a federal judge’s order mandating the use of face-covering in the indoor transportation settings remains necessary for public health and safety.

Moreover, the United States Centers for Disease Control and Prevention will continue to monitor public health situations to determine whether such an order remains essential. The agency anticipates this’s a legal order, well within the lawful authority of the U.S. CDC to defend public health.

And the Centers for Disease Control and Prevention continue to endorse and recommend that Americans use face coverings in all indoor public transportation settings. The top priority of the health agency is protecting their nation’s public health.

According to the CDC press release, when people use a well-fitting face mask or respirator over their mouth and nose in indoor public transportation settings, they defend themselves and people around them against the fatal COVID-19, including immunosuppressed or those not still jab-eligible, and help keep traveling & indoor public transportation safer for every American.

Furthermore, the AP-NORC poll finds fifty-four percent of US those interviewed think President Biden has been ‘not tough enough’ in his reaction against Moscow’s brutal incursion of its neighboring country, Ukraine. Eight percent of those polled Biden has been ‘too tough,’ while 36% believe President’s approach has been about right.