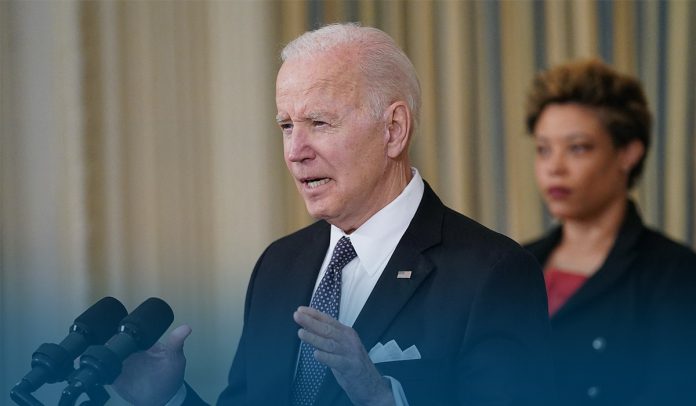 On Monday, the United States President said that he would make no apologies after his fresh remarks that Russian leader Vladimir Putin can’t stay in power, emphasizing he was expressing ‘moral outrage’ that he felt. But he also explained that he was not enunciating a policy shift. On Monday, the US leader told the media at the White House that people like this should not be ruling nations, but they do. And the actuality they do does not convey he couldn’t express his outrage regarding it.

The impromptu comments of Biden about Putin, while talking with international participants and Ukrainian refugees in the Central European country of Poland on March 26, stirred controversy in America and caught some Western European partners by surprise.

While refusing to agree that his remark could intensify tensions over the Ukraine crisis, the US President said: the last thing he wants to do is to be involved in ground warfare or atomic warfare with Putin’s Russia. In the meantime, according to the senior US Defense official, Putin-led military forces have halted ground advances toward Kyiv – the capital of Ukraine – as they seem refocused on Eastern Ukrainian areas.

Moreover, the Official said while briefing the media on Monday that they obviously aren’t advancing toward the Ukrainian capital anymore. And what the world is seeing is this sustained re-prioritization of the Donbass region. The official added that the fresh military shift of Russian troops appears to be an attempt to cut off Ukrainian military forces in the Eastern part of the embattled country.

The Official also said that the measure could be an effort by Moscow to acquire negotiating advantage in peace discussions with representatives of Ukraine endeavoring to end Russia’s brutal attacks.

Furthermore, the United Kingdom’s Ministry of Defense said that the PMC Wagner – a Russian paramilitary organization – has been deployed to Ukraine’s East. According to the Ministry, Wagner anticipated deploying over a thousand mercenaries, including the organization’s senior leaders, to take on combat operations. The Ministry added that the forces were being drawn from Africa and Syria.

General Stephen J. Townsend, Commander, United States Africa Command, told the reporters earlier in March that the private Russian mercenary firm was attempting to recruit its private soldiers in Africa to fight in the former Soviet Republic. Moscow has been supporting separatist forces in the Donbass region of south-eastern Ukraine since 2014, when Russia illegitimately annexed Crimea, a peninsula in Eastern Europe. The Ukrainian military has halted Russian forces from occupying most major cities in Zelenskyy’s Ukraine.

Mariupol Mayor Vadym Boichenko said that including over two hundred children, about five thousand people, have lost their lives in the city, which Moscow forces have heavily bombarded since the brutal incursion began in February. Boichenko requested for relocation of the remaining 0.16M people in Mariupol. However, Ukraine’s Deputy PM Iryna Vereshchuk said now green corridors would open amid intel of possible Russian military assaults en route.