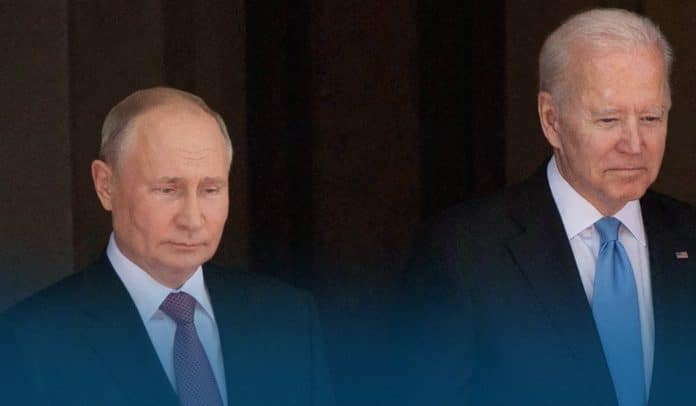 On Wednesday, the United States President responded to Kyiv’s emotional live-video plea with an 800M dollars security help that contains a range of defensive weapons – a retort that falls short of the ‘air exclusion zone’ over Ukraine Mr. Zelenskyy seeks as his state experiences nonstop attacks from Russian military forces. But, the US President Biden also increased the emotions in the battle of words between himself and the leader of the Russian Federation.

The US President has branded Vladimir Putin, the Russian President, a ‘war criminal’ in a move anticipated to intensify diplomatic tensions even more. Biden delivered the statement impromptu in response to a question of the reporter at the White House. It is the maiden time Biden has used such a style of speech to criticize Mr. Putin, and the White House later stated he was speaking straight from the heart. However, Moscow said that Biden’s statement was unacceptable and inexcusable rhetoric.

Video: Biden is asked after a White House event whether Putin’s a war criminal. He initially says, “no,” but then leaves, turns around to come back, has @JacquiHeinrich ask the question again.

This time? He says, “I think he is a war criminal.” pic.twitter.com/OwnLaZU3Gs

When pushed for details, the White House Press Secretary said that Biden’s remarks speak for themselves; he was speaking from the heart and from what you have seen on TV, which is vicious moves by a cruel dictator through his incursion of Ukraine – a post-Soviet country. The Putin-directed military launched the all-out attack 3-weeks before on 24th February. His armed forces have hit schools, hospitals, and residential buildings. The actor-turned President said that nearly a hundred children had lost their lives in a large-scale invasion.

The fresh United States assistance package brings the sum of security assistance to Ukraine to 1.01B dollars only this week. According to the US leader, this latest package on its own is going to deliver unparalleled aid to the former republic country.

What US Included in $800M Security Aid to Ukraine?

According to the White House fact sheet on American Security aid for Ukrainians, the $800M package includes:

In addition to the arms listed above, former U.S. support committed to Ukrainians includes:

Furthermore, on Wednesday, the Pentagon said that efforts to deliver the military equipment are already in progress.

Jens Stoltenberg, Secretary-General of NATO, said that there’re 0.1M American troops in the West and another forty thousand personnel under direct Western Military Alliance command, as well as thousands additional on high alert all over NATO countries. The US President is to join leaders of the NATO at NATO headquarters in Brussels for an ‘extraordinary Summit’ occurring on 24th March, marking a month since Moscow launched its incursion.