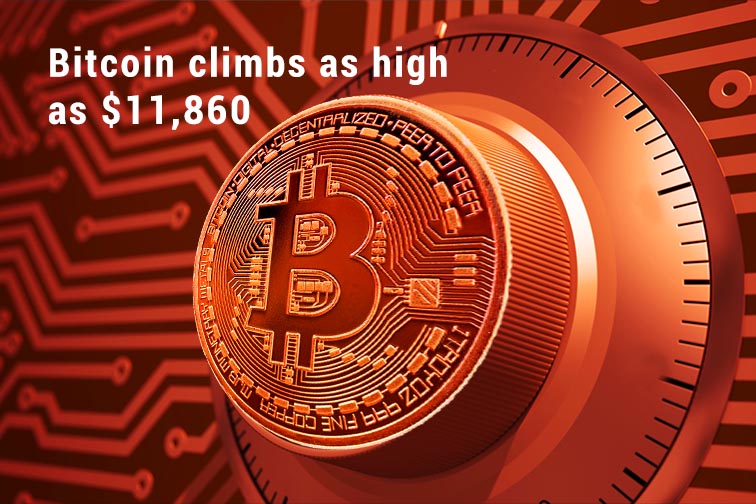 On Monday, bitcoin soared 9% performing a feasible asset, as it touches $11,000 for the first time since round about mid-July. According to the CoinDesk data, the price of the largest cryptocurrency of the world got the highest peak at $11,860, hitting over three-week high. The value of the bitcoin now accounts for about 70% of the worldwide market of crypto, CoinMarketCap stated.

On the other side, after the last week Trump decision to impose 10% tariffs on additional Chinese goods having worth of $300 billion, the worldwide stock markets slipping lower on the back of latest trade uncertainty. On Monday, the Stoxx 600 index of the pan-European slides 1.6% whereas, the Asia-Pacific MSCI’s widest index shares outside Japan dropped 2.5%.

…during the talks the U.S. will start, on September 1st, putting a small additional Tariff of 10% on the remaining 300 Billion Dollars of goods and products coming from China into our Country. This does not include the 250 Billion Dollars already Tariffed at 25%…

Graphical Representation of Bitcoin’s performance in the last three months

Recently, analysts discussed the case that bitcoin might a safe shelter asset with financiers gathered towards the digital asset formerly on the support of the rise in the United States-Sino tensions. The CEO of CryptoCompare (digital currency comparison platform), Charles Hayter, said that Bitcoin has several use cases and among them, the most significant is as a form of digital gold. He added, they seen the bitcoin jump before on international uncertainty as turn into a conduit and flight to safety asset.

Depreciation of the Chinese Currency Yuan

Bitcoin gains the value just after when China devalued its yuan to about seven against a dollar for the first time during the last eleven years, generating worries of a potential currency war. The yuan drops after the central bank of China, the China People’s Bank set the daily midpoint of the currency at 6.9225 against the dollar, its lower level since last December.

Read Full Article: Chinese Yuan Loses its worth against Dollar at worst Level

In 2019, after doubling the worth during the last three months, the digital currency got its rise. However, it is still less a year-to-date high of $13,880, and at a considerable difference from $20,000 overall record, it acquired in 2017. After the news of the rise of Bitcoin, giant firms like Facebook started to involved in the space and announced plans for launching its own cryptocurrency ‘Libra’ in June.

Despite the fact, both cryptocurrencies are different and Libra still not launch in the market, but the experts are saying that the launch of Facebook’s digital currency can legitimize bitcoin and other digital currencies.

It is an observation that Facebook is not only a single company to show its interest in cryptocurrencies. Other companies like Fidelity, the financial services giant also set up a unit dedicated to digital assets. Whereas, Microsoft, Starbucks, and owner of New York Stock Exchange, Intercontinental Exchange backed a digital currency-focused project named as Bakkt.