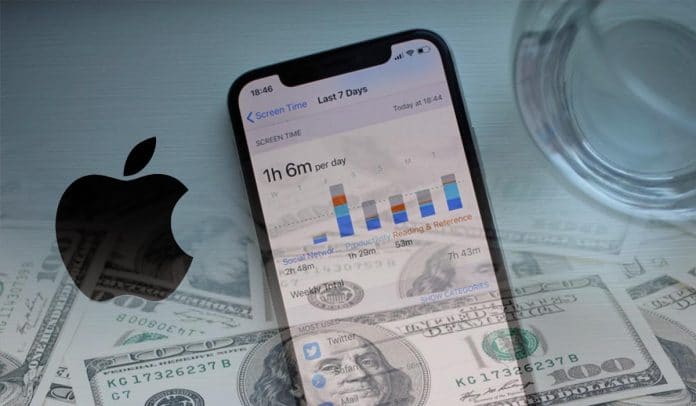 Among its several accomplishments – the iPad, the iPhone, the Apple App Store, and iTunes – Apple can now boast of another: It was fleetingly worth over $2 trillion, making it the first firm in the U.S. to reach that milestone. The stock of the iPhone manufacturer hit the $2 trillion mark before tumbling back slightly below that lofty level.

Apple was briefly worth more than $2 trillion, making it the first company in the United States to reach that milestone, before dipping back slightly below that lofty level. The stock has surged almost 60% this year and is at an all-time high. https://t.co/yptEbPgTUb

Shares of Apple finished the day flat Wednesday. The stock raised around sixty percent this year and stood all-time high. At present, Apple trading at almost $465 per share is about to become more reasonable for average investors to purchase, too. The sock of the firm will split four-for-one at the month-end, which will cut the price of one share to around $116. The value of the tech giant remains the same since it will merely have more shares trading at a lower price.

Recently, Tesla also announced a stock split – an initiative that could attract more Gen Z and millennial investors. Apple reached a milestone of $2 trillion just in two years after crossing the $1 trillion level. It took only five months for the stock to over double after plummeting in March. Just like many other tech stocks, Apple boomed back to life at that time – even as the economy fell into a slump.

It is not the first firm globally to valued that high. Saudi Aramco surpassed that mark in December when it went public. However, tumbling oil prices hurt the stock of the company. Earlier this month, Apple passed the Saudi Aramco after reporting strong earnings. Similarly, two other tech giants – Microsoft and Amazon are moving closer to the $2 trillion marks also. Both these companies valued at around $1.6 trillion. Alphabet, the parent company of Google, is also worth over $1 trillion.

The success of Apple also jumped Tim Cook, Apple’s CEO, into the ranks of billionaires – one of the few CEOs to reach that milestone without starting the firm he leads. The market allayed concerns that policymakers have about the clout of Apple as well as other tech giants. They also have concerns about how much of the immigration policies of the Trump administration will hurt Apple and other large tech firms.

Investors have a huge interest in Apple because of its surging sales for subscription services such as iCloud, Apple Music, Apple Arcade, and Apple TV+. Also, there is mounting excitement about the awaiting launch of the iPhone 12, which is likely to have super-fast 5G connectivity. For that reason, Apple and other tech giants are also holding up much better than several other firms during the worldwide collapse due to the coronavirus pandemic.