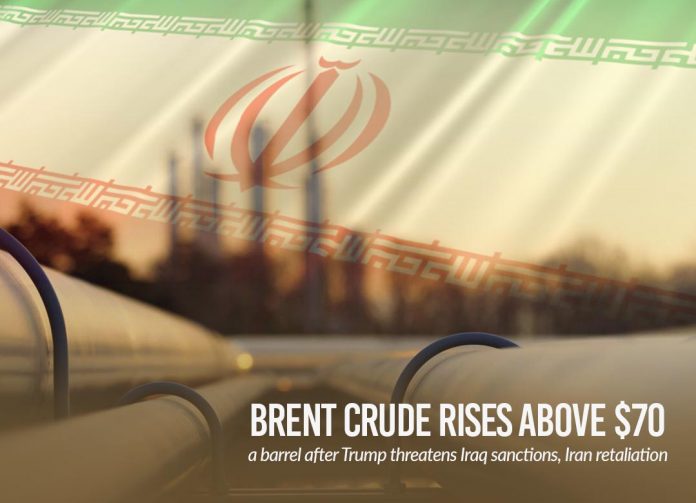 After the threat of the United States President Donald Trump to impose sanctions on Iraq due to the escalating strain with Iran, oil prices rise more than 2% on Monday. From the settlement of Friday, Brent crude futures rose to a high of $70.27 per barrel at 0222 GMT, up 2.4% or $1.67. The United States West Texas Intermediate crude was at about $64.39 per barrel, up 2.1% or $1.34 after hitting $64.44 earlier, the maximum since April.

The gains extended Friday’s over 3% rise after a United States airstrike in Iraq that killed the major commander of Iran Qassem Soleimani on Friday. The killing raised concerns of an escalating Middle East conflict that might disrupt the supplies of oil from a region that accounts for almost half of the oil production of the world. Donald Trump threatened to impose sanctions on Iraq in a tweet on Sunday.

Iraq would be the major oil producer among the Organization of the Petroleum Exporting Countries (OPEC) if the troops of the United States forced to withdraw from the country. Earlier this month, Baghdad called on the U.S. and other foreign troops to leave Iraq. Furthermore, Trump said that the U.S. would react back against Iran if Tehran were to retaliate after the killing of their commander.

The United States just spent Two Trillion Dollars on Military Equipment. We are the biggest and by far the BEST in the World! If Iran attacks an American Base, or any American, we will be sending some of that brand new beautiful equipment their way…and without hesitation!

Ayham Kamel, the analyst at Eurasia Group, said in a note that the airstrike will start a prolong regional escalation with major risks to the assets of the United States along with Mideast energy infrastructure that still stops short of war. However, the risk of limited war is real. It might include extensive attacks on Iran on Gulf energy targets and direct naval clashes between the United States and Iran.

These Media Posts will serve as notification to the United States Congress that should Iran strike any U.S. person or target, the United States will quickly & fully strike back, & perhaps in a disproportionate manner. Such legal notice is not required, but is given nevertheless!

They attacked us, & we hit back. If they attack again, which I would strongly advise them not to do, we will hit them harder than they have ever been hit before! https://t.co/qI5RfWsSCH

The Projected Oil Prices in 2020

The consultancy estimates the 2020 global oil prices to range from $65 to $75 per barrel, because of the risks to the infrastructure of oil in the region. Moreover, Caroline Bain, the Capital Economics analyst, said that the incident of Friday has all but decreased the possibility of lifting the sanctions on Iran, a major shortcoming risk to their oil price estimate. In a note, she said that irrespective of the geopolitical events, they expect forced supply evolution and an uncertain pick-up in demand to compel oil prices higher in 2020.