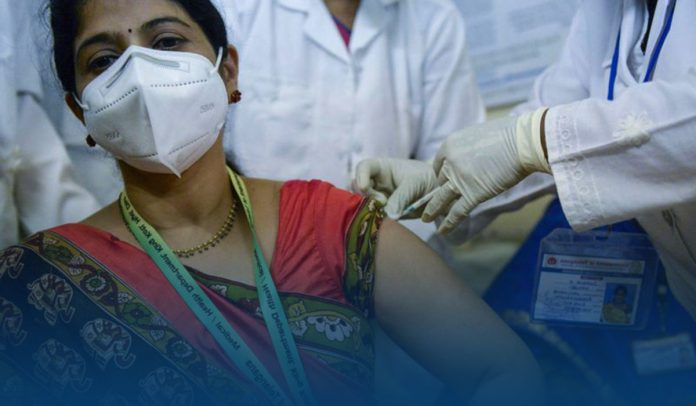 A health-worker became the first Indian to receive a COVID-19 vaccine as the country started the world’s largest vaccination drive.

Indian Prime Minister Narendra Modi launched the program, aiming to inoculate more than 1.3 billion people against coronavirus. He praised the front-line workers who will be the first to receive vaccine shots.

India has confirmed the second-highest number of COVID-19 infections in the world after the United States of America.

The millions of doses of two approved vaccines, Oxford-AstraZeneca’s ‘Covishield’ and Bharat Biotech’s ‘Covaxin,’ were transported across India in the beginning days of the inoculation drive.

While addressing his people on Saturday morning, Modi stated that they are launching the world’s biggest inoculation drive, and it presents the whole world our capability and competence. Moreover, he added that India was well organized to inoculate its people with the help of an app, “Co-Win.” The Co-Win platform would help the Indian government track the drive and ensure everyone got immunized.

Modi talked in great detail that the doctors, nurses, and other front-line COVID-19 soldiers displayed us the green-light in dark-times. The prime-minister praised them for their staying away from their families to serve humanity. However, hundreds of them never went home back. They presented their lives to save the Indian people. So, to pay respect, the first shots are being given to health-care workers.

PM Modi also appealed to people to continue following COVID safety protocols like wearing face-masks and practicing social-distancing. He added that the state couldn’t afford to feel smug as vaccination will take much time.

Moreover, Modi advised people not to believe any false information about the vaccines’ safety being used in the drive. Additionally, he wanted to express to Indians that both vaccines’ approval was given only after medical experts showed their satisfaction.

In the first round, nearly 10-million health-workers will receive vaccine doses. After health workers, soldiers, police officers, and municipal members will receive jabs. In the vaccine-receivers line, next will be the individuals aged over 50 and anyone below 50 with severe health conditions. India’s electoral rolls containing details of nearly 0.9 billion voters will be used to recognize eligible recipients. The Indian government aims to immunize 0.3 billion people by August 2021. This will happen in state-controlled health-care centres, colleges, schools, wedding halls, municipal workplaces, and community halls. Many hospitals across India are giving the first-doses of the COVID-19 vaccine.

Dr. Atul Peters was amongst receiving the vaccine-shot at Max hospital. He was grateful to medical experts who worked hard to produce the vaccine. He told BBC that they worked very hard during the coronavirus pandemic to save lives, and now they are also taking the vaccine shot first to eliminate fears in people’s minds for the vaccine being unsafe.

Electronic Tracking in Real-time and “Certificate of Vaccination”

Although two vaccines (Covishield and Covaxin) earned approval from India’s drug regulator, concerns have been raised over the effectiveness of Covaxin because the official’s emergency approval came before the completion of Phase-3 clinical trials. The drug regulator and the vaccine-manufacturer stated the vaccine is safe to use and that the efficacy-data will be available next month. Both vaccines will be injected in two doses twenty-eight days apart, and the second dose is a booster. Immunity would begin to kick in after the first dose but reaches its full result fourteen days after the second shot.

Dr. Gagandeep Kang (India’s famous vaccine expert) told the BBC that he expects India’s inoculation program to be run much better than most nations because of significant government investment and early preparation.