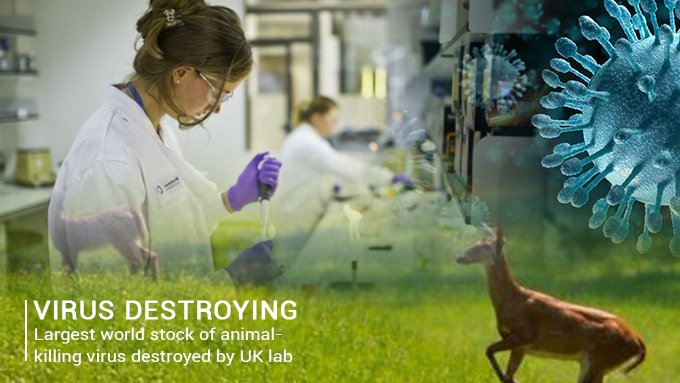 United Kingdom’s laboratory scientists destroyed the stocks of the virus once that was the reason for devastating cattle loss. These stocks accounted for several lab samples of rinderpest of the world that held at The Pirbright Institute. Few international news agencies get access to the final samples.

The Pirbright Institute’s scientist, Dr. Carrie Batten termed the moment as the end of an era. She said that rinderpest was shocking, and by removing stocks that held internationally, you are basically reducing the risk dramatically. Dr. Michael Baron, who is the honorary fellow at the institute, stated that the end of rinderpest virus would a stamp on the start of a new war on other diseases.

He added that the success they achieved with rinderpest is one among the main drivers for people who say that they can do this with other diseases of animals along with human diseases like measles, polio, and mumps. He explained that these diseases are eradicable and it should done.

In history, rinderpest is the reason for one of the most horrible disasters. In the 1890s, during an outbreak, it is the cause to kill about 80% to 90% cattle in the southern and eastern Africa. Due to this massive number of cattle expiries, it caused starvation in that region. And because of the starvation, millions of people died. Only in Ethiopia, one-third population of human wiped out. The lives toll scale matched only with the Black Death in Europe.

Since the declaration as eradicated in 2011, the disease got under controlled after a vaccination campaign. However, thousands of virus samples remained in forty laborites of thirty-six countries. In case of any accident or mishap, the disease could leak out and once again will cause devastation.

Read Also: Over 100 Children died of Brain Disease in India

US Imposes new Sanctions of Iran after strikes on US bases...