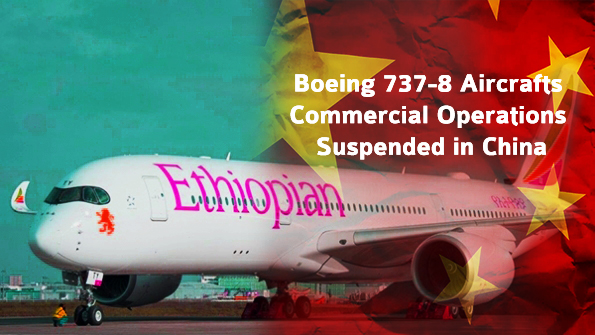 Chinese Airlines have to suspend Boeing 737 MAX aircrafts all commercial operations after the tragic crash of Ethiopian Airlines as order by Chinese civil aviation regulator at 6 p.m. local time (1000 GMT). Ethiopian Airlines tweeted on their official account that until further notice from officials they also grounded its Boeing 737 MAX 8 after the deadly crash of one of their aircraft resulting all passengers’ dead.

That was the second crash of Boeing 737 MAX, in the first one crash, all the passengers on board were also dead. 737 MAX is the latest type of Boeing with a narrow-body jet that started its service in 2017. Ethiopian Airlines said that however, they don’t know the actual reason of the crash, but they had agreed to ground that specific jet as an extra safety precaution.

According to the flight-tracking website FlightRadar24, Ethiopian Airlines has left the fleet of four 737 MAX 8 jets after the crashed aircraft on Sunday. On the other hand, Lion Air of Indonesia with fleet 737 MAX on domestic flight fell after the thirteen minutes of take-off resulting killing of all 189 passengers on board.

In a statement (CAAC) Civil Aviation Administration of China said that to ensure flight safety they after communicating with Boeing and the United States Federal Aviation Administration it will notify Ethiopian Airlines to resume their flights with 737.  CAAC further said that in both crashes the flight was with new Boeing 737-8 aircraft and the accident happened during the take-off process, and there is some sort of similarity in both the incidents. Furthermore, they also stated that their order was due to their principle of zero tolerance on the safety hazards of passengers.

The Indonesian jet crash’s cause is still in the phase of the investigation. In last November, before the recorded voice of cockpit recovered the initial report issued focusing on the maintenance and training of airline and also the Boeing anti-stall system response to a replaced sensor recently. But they never state any reason for the crash. The state company regulator expressed on Weibo that Chinese airlines have 96 Boeing 737 MAX jets in service.

A Chinese official news outlet Caijing that covers economics and finance stated that several flights which scheduled to use 737 MAX crafts would now use the 737-800 models instead. However, a spokesperson of Boeing denied commenting. On the other side, the United States official said to Reuters that the US was uncertain of that information on which China was acting on.

Due to the sensitivity of the problem, the United States official talking on condition of anonymity they said that 737 MAX has no plans to follow and had a record of stellar safety in the United States and is the absence of necessary information regarding the cause of the Ethiopian Airlines crash.

From the information given on the flight tracking website FlightRadar24, it is revealed that there at 0043 GMT on Monday there were no 737 MAX 8 planes flying over China. Many of the 737 MAX fleets of fifteen aircraft of Air China landed in the evening of Sunday except two jets from international destinations that landed on Monday morning.