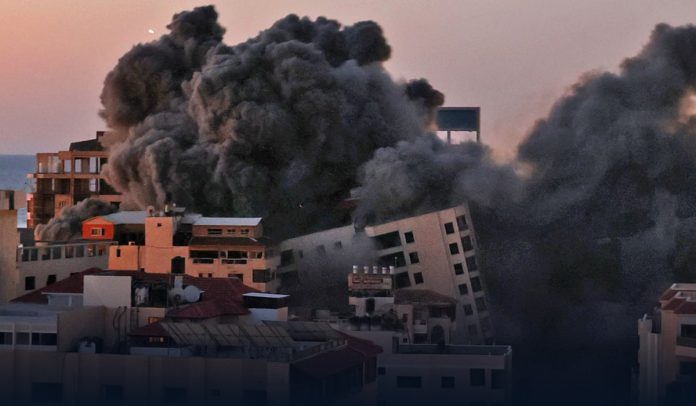 Benjamin Netanyahu, Prime Minister of Israeli, declared a state of emergency in the central city of Lod after Israeli Arabs’ rioting, as the conflict between Palestinian militants and Israeli forces intensified. Israeli border police force has been brought in from the West Bank.

Mr. Netanyahu’s statement came after an Israeli Arab was killed in Lod the previous night as violence skies high between the State of Israel and the Palestinian territories.

For the first tim since 1966, the Israeli Ministry of Home Security declares state of emergency in the 1948-occupied city of Lod after angry Palestinians who are protesting against the Israeli violations have swept through the city.#Jerusalem #SaveSheikhJarrah #GazaUnderAttack pic.twitter.com/CjNHnfIelk

According to an AFP photographer, the Israeli PM himself went to the city to call for calm.

Cars were set on fire and a father and daughter, both Israeli Arabs, died when a rocket hit their vehicle.

Palestinian militants fired hundreds of rockets deep into the State of Israel, while Jerusalem carried out heavy air raids on Gaza Strip.

According to medical officials, at least 35 Palestinians, including ten children and 5 Israelis, have been killed in the violence up to now.

The local police confirmed to AFP that including almost 23000 Arab Israelis and 47000 Jewish Israelis, the city of 77000 people had been the scene of violent clashes on May 10.

But on Tuesday (May 11) evening, as demonstrations multiplied across the occupied West Bank, East Jerusalem, and also Israeli Arab cities, police said that the situation degenerated in Lod.

Health officials said there were still civilians’ deaths in violence

The police stated that some of the Arabs and endangering communities erupted wide-scale demonstrations, adding vehicles were burnt and damage caused to property.

The government said reinforcements had been deployed after Israeli media reported that three synagogues and several businesses were set on fire in Lod.

Law enforcement added that sixteen border police platoons mobilized in ranges to deal with the violence. Police said that there were also violent acts in Israeli Arab areas, including Wadi Ara, Acre, and Jisr A-Zarqa, where at least 8 people were detained.

Unfortunately, nightly conflicts since then at the compound, which is holy to both Jews and Muslims, and elsewhere in East Jerusalem have left nearly seven hundred Palestinians wounded.

Israel’s armed force says it targets militants in Gaza in response to rocket attacks on Jerusalem and other parts.

The Israeli army said that over a thousand rockets had been fired towards southern and central Israel by Palestinian militants since Monday evening when conflicts suddenly intensified.

The Palestinian militants said they targeted the Israeli city of Tel Aviv after an Israeli air raid on Tuesday destroyed a tower block in the Gaza Strip. Moreover, a second tower block collapsed in the Gaza Strip after another Israeli attack. The residents were directed to evacuate the 12-story Al-Jawhara Tower. However, medical officials say there were still civilians’ deaths.

Palestinian militants said that nearly two hundred missiles were fired at Beersheba and Tel Aviv after the tower attack.

Happenings in the central city of Lod

Israeli Arabs’ protests broke out in Lod and escalated to full-scale rioting, with demonstrators throwing rocks at the police force, who responded with stun grenades.

WATCH: A state of emergency has been declared in the Lod as fighting between Israelis and Palestinians grips the city a day after a Palestinian protester was killed by an Israeli settler.
Lod Mayor has begged the army to intervene saying the city had descended into ‘civil war’. pic.twitter.com/mLy67rXBGs

The demonstrations followed an Israeli Arab male adults’ funeral who died during unrest in the city earlier.

According to the Times of Israel, a 52-years-old father and his daughter, 16, died when a rocket hit their car on Wednesday morning, also severely injuring the mother.

Israeli newspaper Haaretz reported that twelve people were wounded in the clashes. Police said the situation degenerated in Lod city as night fell.

Israeli media reported that numerous businesses and synagogues had been set on fire, while Reuters said there was news of Jews stoning a car that an Arab resident was driving.

Israeli PM declared a state of emergency in Lod on Tuesday night. The Times of Israel newspaper said this was the first time since 1966; the administration had used emergency powers over an Arab community.

Moreover, there has been unrest in other cities with a significant Israeli Arab population and the West Bank and East Jerusalem.

Yair Revivo, Lod Mayor, was quoted as saying by the Times of Israel that all of Israel should recognize this is a total loss of control. Revivo said the civil war has erupted in the central city of Lod.

Benjamin Netanyahu, who went to the city of Lod to call for calm, stated he would impose a curfew if necessary.