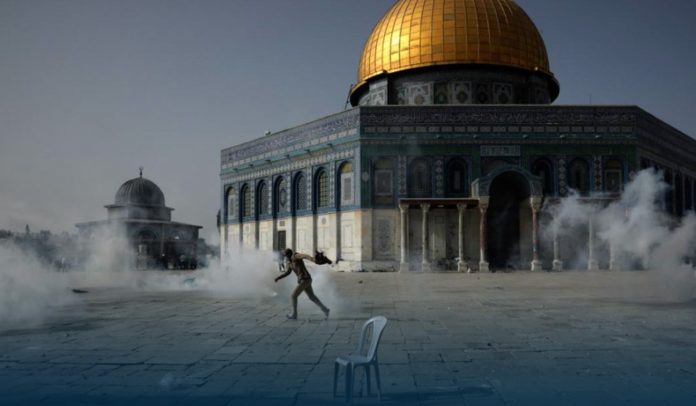 Israel has launched air raids against militant targets in Gaza after rockets were fired from the coastal territory towards Jerusalem.

Israel and Palestinian militants in the Gaza strip have been exchanging fire through the night after clashes in Jerusalem on Monday (May 10) left hundreds wounded and tensions sky high, prompting an uptick in the violence.

According to the Palestinian Health Ministry, Israeli airstrikes have left at least twenty-two dead in Gaza. The Israel Defense Forces (IDF) says it killed fifteen militants.

In the meantime, on Tuesday morning, at least 6 were injured in the Israeli city of Ashqelon (50 km south of Tel Aviv and 13 km north of the border with the Gaza Strip) after a residential building was hit with rocket fire from Gaza and after the militant wing of Hamas, the Izz ad-Din Al-Qassam Brigades, vowed to make Ashqelon hell.

In Jerusalem, the rocket fire caused the parliament of Israel to be evacuated as sirens echoed.

Tensions between the Palestinians and Israel spiraled in the past few days. Moreover, Gaza’s Hamas rulers had threatened to strike after many Palestinians were wounded in impacts with Israeli law enforcement in Jerusalem.

Israel stated it had killed at least three Hamas militants. Lt. Col Jonathan Conricus, the Israeli military spokesman, told the media that they have started to attack military marks in the Gaza strip.

U.N. Security Council meets on Jerusalem violence but holds off on statement

Earlier on Monday, tensions at the compound, the third holiest in Islam, which Jews also revere, escalated with over 300 Palestinians wounded when Israeli police stormed the AL-AQSA mosque, firing rubber bullets, lachrymator, and stun grenades.

The U.N. Security Council held an urgent meeting on the unrest in Jerusalem as global leaders drove the de-escalation of the strains.

Hamas sources told the BBC that Mohammed Abdullah Fayyad, a commander of Al-Qassam Brigades, had been killed. Israeli PM Benjamin Netanyahu stated Hamas had ‘crossed a red line’ and that Jerusalem would return with great force.

Supreme Court of Israel had been due to hold a hearing in the long-running case on May 10, but the session was postponed amid the trouble.

What happened around the AL-AQSA mosque?

Israeli Police said thousands of Palestinians had fortified themselves in the building overnight with stones and Molotov cocktails in expectation of a confrontation during the Jerusalem Day Flag March, which was planned to commence at about 16:00 or 13:00 GMT.

Police force added that officers were ordered to enter the mosque compound to repel the rioters using demonstration dispersal approaches on early Monday after a police post was attacked and stones were thrown towards a nearby road. Police fired stun grenades, tear gas, and rubber bullets at Palestinians for over an hour, who threw stones and other objects at them.

The 3rd holiest site in Islam, the AL-AQSA mosque, is located on a hilltop complex known by the Muslims as the Haram esh-Sharif, the Noble Sanctuary, and by Jews as the Temple Mount. Jews revere it as the place of two Biblical Temples, and it is the holiest site in Judaism.

A vehicle was attacked with stones before crashing into bollards and hitting a man during clashes outside the Old City walls.

The Palestinian Red Crescent said that almost 305 Palestinians had been wounded in the clashes and that nearly 228 had been taken to hospital for medical cure. Seven of them are in severe condition. The Israeli police force said twenty-one officers had been injured and that 3 had needed clinic treatment.

Benjamin Netanyahu defended the police. He said that it is a battle between tolerance and intolerance, between order and lawless violence.

Spokesman Nabil Rudeineh stated that the Israeli occupation forces’ brutal raid and assault on worshippers in the blessed AL-AQSA Mosque is a new challenge to the global community.

Read Also: Washington yet to Respond to the escalation of violence on US targets in Iraq