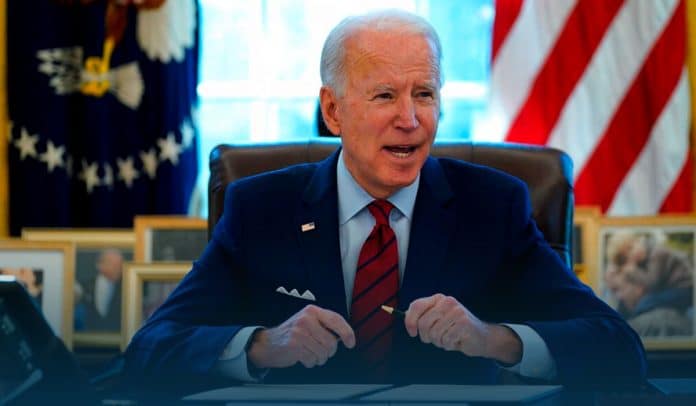 United States President Joe Biden criticized a sweeping elections bill signed into law in Georgia, calling it ‘Jim Crow in the 21st Century’ and ‘an atrocity,’ saying the Department of Justice is taking a look at the measure. In a statement on Friday, Mr. Biden also condemned the law as ‘un-American.’

When asked if there was anything the White House could do to defend voting rights in Georgia, Joe Biden told reporters on a tarmac in Delaware that they’re working on that. Moreover, they do not know quite precisely what they can do at this point. The U.S. Justice Department is taking a look as well.

Earlier Friday, the Justice Department’s spokesperson told CNN that the agency is ‘aware of the law’ but had no further statement.

Mr. Biden called on U.S. Congress in a statement released Friday to pass voting rights legislation that would counter restrictions GOPs are trying to push through at the state level across the nation.

Biden said in the White House released a statement, referring to the November 3 election, when he became the first Democratic presidential candidate in nearly three decades to WIN the state, that court case after court case and recount after recount upheld the integrity and outcome of a free, fair, and secure democratic process.

Georgia is the first presidential battleground to impose new voting limits following Joe Biden’s victory in the state. Still, the bill, which GOP Governor Brian Kemp signed into law on Thursday evening, is part of a national GOP effort to restrict access to the ballot after the November 3 election saw record turnout.

Republicans in the State rushed through an un-American Law

Joe Biden narrowly won Georgia’s state last fall, the first Democratic presidential nominee to pull it off since 1992. Then-President Trump unsuccessfully disputed the election outcomes in the battleground state. Their lies about voter fraud have given rise to measures like Georgia’s, which he praised in a statement on Friday.

But Mr. Biden has minced no words as to whether he believes the provisions are racially motivated.

Mr. Biden stated This is Jim Crow in the 21st Century. It must end, noting how the restrictions excessively target Black voters, who proved crucial to recent Democratic victories in Georgia.

Georgia’s new law imposes new voter identification necessities for absentee ballots, limits the use of ballot drop boxes, makes it a crime to approach voters in line to give them food and water, and provides state authorities more power over local elections.

Biden said that instead of celebrating Georgians’ rights to vote or winning campaigns on the merits of their ideas, GOPs in the state instead rushed through an un-American law to deny people the right to vote. Like many other laws being pursued by GOPs in statehouses across the nation, this law is a blatant attack on the Constitution.

Soon after releasing the statement, the U.S. President told reporters outside the White House that the Georgia law was an atrocity.

In Georgia, Republicans have pushed back on Mr. Biden’s assessment of the new law

Kemp said Friday that there is nothing ‘Jim Crow’ about demanding a state-issued ID or photo to vote by absentee ballot; every Georgia voter must already do so when voting in-person.

A Republican, Brad Raffensperger, Georgia Secretary of State, who defied Mr. Trump’s pleas in a telephone-call to find votes to reverse Mr. Biden’s victory, also asserted that the exclamations of ‘voter suppression’ from those on the left ring hollow when it comes to the new voting law.

For example, Black voters are more likely to vote remotely and less likely than other voters to have the identification now required by the law to cast an absentee vote. Moreover, voting rights activists argue that the provision in the law that makes it a misdemeanor to approach voters in line at the polls with water and food will excessively affect communities of color, where the average wait time to cast a ballot in the June 2020 primary was more prolonged than in mostly White communities.

Joe Biden stated in his Friday statement that he will take his case to the Americans, including GOPs who joined the broadest coalition of voters ever in this past election to put nation before party.

Biden says, ‘if anyone ever wondered if one vote can make a difference, Georgia proved it’

On Friday, Biden made his case several times. During an afternoon fundraiser for Atlanta Mayor Keisha Lance Bottoms, he thanked Georgia for supporting him and more criticized GOP efforts to add voting restrictions. The U.S. President said that if anyone ever wondered if one vote can make a difference, Georgia proved it.

Georgia state Rep. Park Cannon was arrested and removed from the Georgia Capitol on Thursday after the bill’s passage. In a video posted on social media, Cannon is seen being led away by several officers with her hands cuffed behind her back.

In the short term, GOP policymakers say they have regained the political initiative by applying pressure in state-houses. Indeed, their efforts have prompted an internal Democratic dispute over scrapping the filibuster to void the state-level efforts to restrict voting access.

In the long term, however, Democrats think the strategy could prompt a progressive backlash that would invigorate their party’s base.

Democratic state Rep. Park Cannon, a Black woman, arrested at the Capitol for simply knocking on the door as he was signing the bill

Mr. Warnock said after visiting State Rep. Park Cannon in the Fulton County Jail that what they have witnessed is a very desperate try to lockout and squeeze the people out of their democracy.

In a scene with echoes of the civil rights era, Sen. Raphael Warnock, Georgia’s first Black senator since Reconstruction, visited a Democratic state lawmaker in jail on Thursday after she was arrested for simply knocking on Mr. Kemp’s door as he was signing the bill.

Psaki said Friday that she thinks anyone who saw that video would have been highly concerned by the actions that were taken by law enforcement to arrest her when she’s seemed to be knocking on the door to (by the video that was provided) to notice if she could watch a bill being signed into the law.