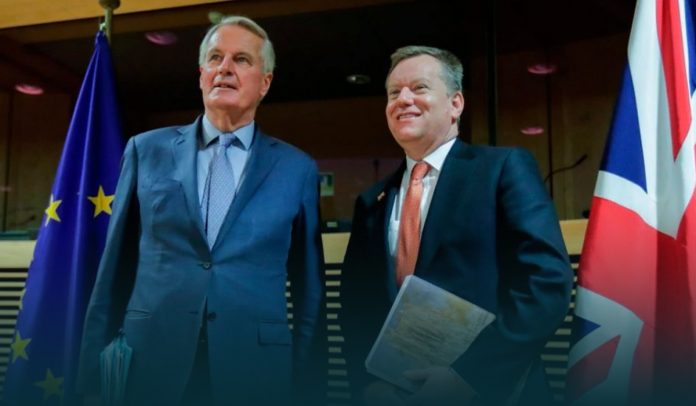 European Union and British negotiators set to meet in Brussels, in a last-ditch try to strike a post-Brexit trade deal before the implementation period ends on December 31. On Saturday, British PM Boris Johnson and European Commission President Ursula von der Leyen directed their teams to resume talks. Barnier tweeted that he and David Frost will resume their talks on Sunday and look upon a way forward.

The Times reported that out of 13 cabinet ministers 8 opposed Brexit and supported a no-deal scenario. On Thursday, the 27 EU states leaders will gather in Brussels for a two-day summit planned to address their budget disputes.

A German think tank estimates that up to 700,000 European jobs could be at risk. But European leaders want to make it clear that they will not personally intervene in the current deadlock in trade talks. There will be no last-minute handshakes.

However, the leaders engage in dialogue with their negotiators, but they do not want to be face-to-face with Boris Johnson.

European Union countries have joined together in a single market. Therefore, any leader of the EU, even in France and Germany, can be considered to be making a political compromise that could end the British agreement.

The EU has warned that without access to the UK waters for its fleets, UK fishermen will no longer get a special grant to EU markets to sell their goods.

Fishing, level playing field and governance and dispute settlement are the three primary critical issues considered by journalists. The disagreement to these thorny issues will result in no workable agreement. EU and UK disagree on how much European fishing boats should have access to British waters, and how much they will get access to catch from the beginning of 2021.

According to the MoD’s website, three River Class patrol ships with a crew of 45 sailors already work “at least 275 days in a year at sea enforcing UK and European fisheries law”. Faisal Islam added the authorities have chosen to focus on “fish and chicks”, live and fresh seafood, often transported from Scotland to French restaurants, as well as day-old chicks.

It is primarily about how the rules of this agreement enforced in the future and what happens if one party breaks them. The EU is urging powers to respond against the UK for breaking the rules in one area, hitting back in another.

There is also the question of who can settle disputes, and the European Court of Justice which will fit. These are all very sensitive issues that will shape future relationships for years to come.