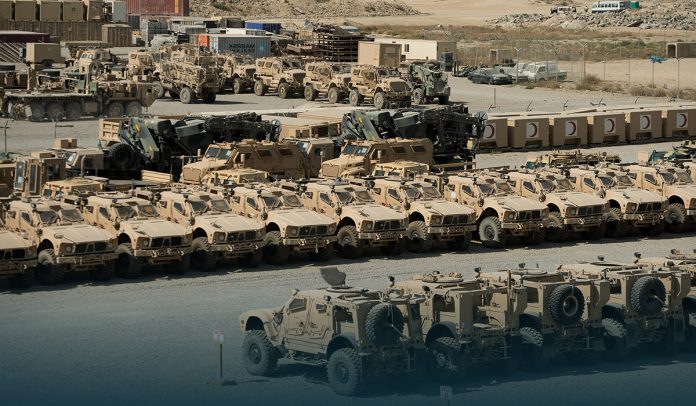 The United States and NATO military have left their key airfield in Afghanistan, Bagram Airbase, after nearly 20 years of US war to remove the Taliban forces and hunt down Al-Qaeda offenders of September 11 attacks, advancing the last pullout that the Pentagon said Friday would be completed by late August. The withdrawal could indicate that the complete pullout of foreign troops from the country is imminent.

The Associated Press reported Friday that US officials, while speaking on the condition of anonymity because they weren’t allowed to issue the information to the news outlet, that the key Afghanistan Airbase was handed over to the Afghan National Security Forces (ANDSF) completely.

#American troops left mighty BAGRAM AIRBASE in Afghanistan on Friday, under an agreement with the Taliban allowing for the withdrawal of all U.S. forces from the country after a 20year war. Base will be officially handed over on 3rd July 2021 in a ceremony#Afghanistan#peace pic.twitter.com/xODc1KVqUz

Moreover, one of the American officials stated that Gen. Austin Scott Miller, the commander of US Forces in Afghanistan, still retains all the authorities and capabilities to protect the troops.

At its peak around 2012, Bagram Airbase saw over 100000 American forces pass through its massive compound thirty miles north of Kabul (capital of Afghanistan).

Reuters Afghan authorities stated that the airbase would be formally transferred to the Afghan administration at a ceremony on July 3.

The pullout from the Bagram Airbase is the ultimate signal that that final of the 2500-3500 American forces have left the country or are approaching a departure, months before President Biden’s pledge that US forces would be gone by 11th September.

How Much Afghanistan War Cost America?

Mr. Biden told media at the White House that after twenty years of American support, he anticipates Afghan forces and administration leaders would handle intensifying attacks by Taliban forces. He said that they have the capacity to be capable of supporting the government.

Joe Biden said he is concerned that they cope with the internal matters that they have to be capable to generate support they require countrywide to maintain the administration.

Furthermore, soon after the mid-April declaration that America was ending its longest war, it was evident that the removal of the American military and their about seven thousand NATO allies would be closing to 4th July, when the United States celebrates its Independence Day holiday. As of this week, most of the NATO military have already left the country.

The US war in Afghanistan is expected to have taken the lives of nearly 70000 Afghan forces and over 47000 civilians. Moreover, the war took the lives of 2442 American soldiers, over 3800 American private security contractors, and almost 1144 soldiers from other coalition nations.

The analysis of the United States’ war this century by the Costs of War (Brown University) estimates that America’s war has cost a total of 2.26 trillion dollars.

Bagram Airbase was built by Russia when the former Soviet Armed Forces occupied the country in the 1980s. America-led coalition troops moved in during Dec. 2001, and it was developed into the largest airfield capable of holding up to ten thousand forces. Moreover, it is served by two runways, the recent of which is 3.6 kilometers long, where cargo and bomber airplanes can land.