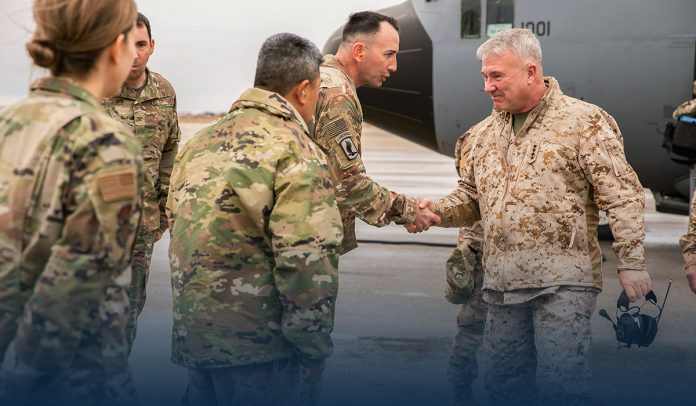 US CENTCOM commander Gen. Kenneth Franklin McKenzie told VOA broadcast Monday that America has no intention to conduct air raids to support Afghan forces after completing United States forces pullout from Afghanistan. The head of CENTCOM also stated that America would plan air attacks only when intentions to carry out a terrorist strike against the US homeland, or US allies, have been uncovered.

Top US commander in the Middle East told in an exclusive interview that would be the reason for any attack that they do in Afghanistan after they leave it would have to be that they have uncovered someone who intends to carry out strikes on US homeland, one of their partners and allies.

Last week, the New York Times (NYT) reported that the Pentagon was in view of if to plan air attacks, either from drones or human-crewed aircraft, to support Afghan forces if Kabul or other major Afghanistan cities were susceptible to falling to the Taliban. Lloyd Austin, US Defense Secretary, declined to give a remark on that report during a Senate Armed Services Committee hearing in the previous week.

The international broadcaster reported that CENTCOM commander’s statements appear to deny the NYT’s report about air attacks being considered.

Nearly 40000 Forces in the Middle East

Gen. McKenzie’s candid description of American involvement in Afghanistan after its pullout coincides with a narrowing anti-terror offensive against Al-Qaeda and Islamic State as the Defense Department prioritizes competition with Russia and China.

Furthermore, McKenzie said that his force size was now nearly 40000 in the Middle East, far less than the 60000-80000 forces number that was almost eighteen months before.

Since Biden’s inauguration, he has ordered the complete pullout of forces from Afghanistan. He reduces American military aid for Saudi-led attacking against Iran-backed Houthi rebels in Yemen. In contrast, US Defense Department has transferred weapon systems and equipment, ships, and forces out of the other Middle Eastern countries.

Moreover, the CENTCOM commander said that US forces pullout from Afghanistan is a significant happening that has stressed resources across the US Transportation Command, which assists shuttle American armed forces people and apparatus to several sites over the globe.

Furthermore, McKenzie tells the media that resources would continue to be tensed as American aircraft would fly from bases many thousand miles away to collect intelligence and hold pressure on terrorists in Afghanistan.