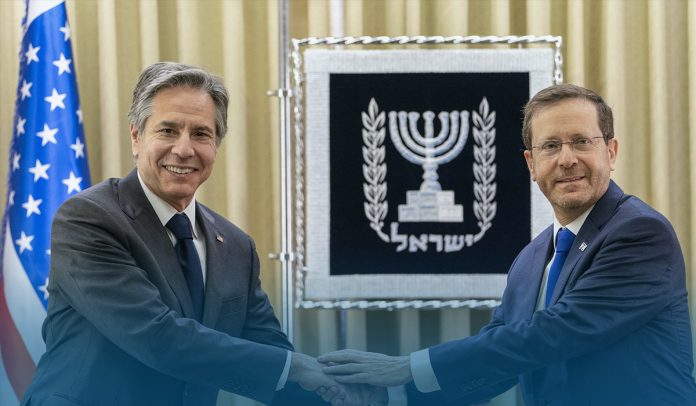 On March 27, Antony Blinken, the U.S. Secretary of State, sought to assure a cautious Israel and its Gulf Arab partners that the U.S. administration is committed to their security before the likely revival of the Joint Comprehensive Plan of Action, known commonly as the Iran nuclear deal – an agreement on the Iranian atomic program reached in Vienna, Austria on July 14, 2015, between the P5+1 and Islamic Republic of Iran, together with the EU.

During a meeting with Israeli PM Naftali Bennett in Israel, Mr. Blinken said ‘deal or no deal,’ would continue to collaborate and with other allies to counter destabilizing behavior of Tehran in the region.

The State Secretary added that after the meeting that Israel and America agreed that the Islamic Republic shouldn’t be permitted to have access to atomic warheads and stressed the efforts to deter the atomic capability of the country if discussions on JCPOA ultimately collapse. Moreover, he stated: whether there’s a coming back to the Iran Nuclear Accord, or not, that principle wouldn’t alter, nor will their commitment to that.

Resisting atomic capabilities of Iran has been a key foreign policy aim for the President Joe Biden government, with America anticipating a renewal of the Iran Deal that would see Tehran limit Uranium in exchange for relief in sanctions.

Furthermore, Tehran has growingly broken away from its commitments under the deal, and several believe it can swiftly develop atomic arms and pose a severe threat to ‘security and stability’ in the Middle East if there’s not a breakthrough quickly.

US Considers De-listing of IRGC

The comments of Antony Blinken came a few hours after the US Special Representative for Iran, Mr. Robert Malley, told the media at the Doha Forum in Qatar that an atomic agreement with the Islamic Republic isn’t very near and isn’t unavoidable amid remaining problems that hold significance to the parties engaged in the negotiations.

And one of the remaining matters with the months-long discussions targeting bringing Washington and Tehran back into agreement with the JCPOA is the de-listing of IRGC (Iran Revolutionary Guard Corps) from the U.S. Foreign Terrorists Organization (FTO) list, a significant demand of Iran. However, Malley said that the Iran Revolutionary Guard Corps would remain sanctioned regardless of what happens with their terrorist group listing.

In addition, an advisor to Iran’s Supreme Leader also told the media in Qatar that the agreement was imminent. He emphasized that Iran’s Army of Guardians of the Islamic Revolution certainly to be removed from the list of the terrorist organization while adding that isn’t the only issue. They’ve nearly five hundred people and institutions sanctioned by America, and all of these or part of these have a direct financial influence on relations between European countries and Iran.