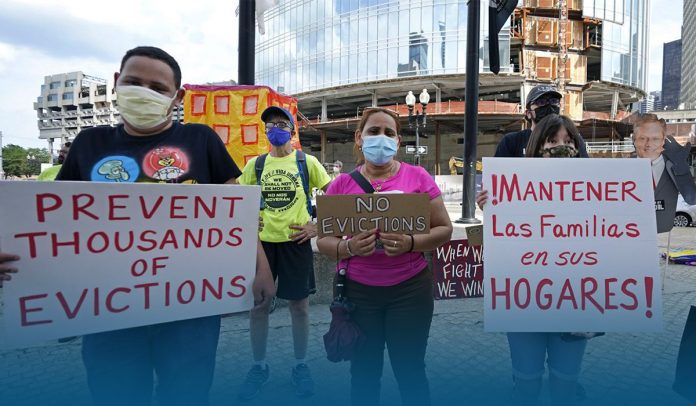 On Thursday, The White House said that Joe Biden, the President of the United States, called US Congress to extend the national eviction moratorium to protect millions of American renters and their families that is set to expire in two days amid surging coronavirus cases and spread of highly infectious Delta variant. The Centers for Disease Control and Prevention put into force the eviction moratorium in September 2020.

The CDC’s federal eviction has been extended many times, but in June 2021, the US Supreme Court ruled that the policy could only be renewed through lawmaking. The US CDC said that it wouldn’t extend the moratorium past 31st July. The national public health agency didn’t immediately give any comment on Thursday. The SC voted 5/4 to leave in place the ban on residential evictions imposed to battle the COVID-19 spread and avoid homelessness during the epidemic.

Associate Justice of the US Supreme Court, Brett Kavanaugh, was one of the five justices who voted to leave the moratorium in place, wrote that in his opinion, specific and explicit congressional approval via new law-making would be necessary for the US public health agency to extend the moratorium past 31st July.

Jen Psaki, a White House spokeswoman, said Thursday that the eviction moratorium prevented thousands of US people from facing the homelessness and health risks that too often stem from evictions, particularly during the COVID-19 pandemic.

How Many Households Were Behind On Their Rent By March 2021?

White House Press Secretary said that given the recent spread of more contagious Delta variant, including among those US people both most possibly to experience evictions and lacking immunizations, American President would have strongly backed the CDC’s decision to further extend that moratorium. But Psaki said that, unfortunately, the SC has made evident that this option is no more available. Some US states have selected to extend eviction bans beyond 31st July, like New York City, whose moratorium extends through 31st August.

Moreover, Jen Psaki said that Nancy Pelosi, House Speaker, believes the eviction ban should be extended and stated that Biden’s White House was looking into doing so.

According to the US Department of Housing and Urban Development (HUD), by the end of March 2021. 6.4M US households were behind on their rent. Furthermore, according to the US Census Bureau’s Household Pulse Survey, as of 5th July 2021, around 3.6M American people said that they experienced eviction in the next sixty days.

Director of the US CDC, Dr. Rochelle Walensky, said in June that would be the final time the eviction moratorium would be extended when she set the deadline for 31st July. It was primarily put in place to avoid the spread of coronavirus by people put into shelters.

Furthermore, the White House said that the US President asked the HUD, Veteran Affairs, Agriculture to extend their respective eviction moratoriums through September’s end to protect US people living in federally insured, single-family properties.