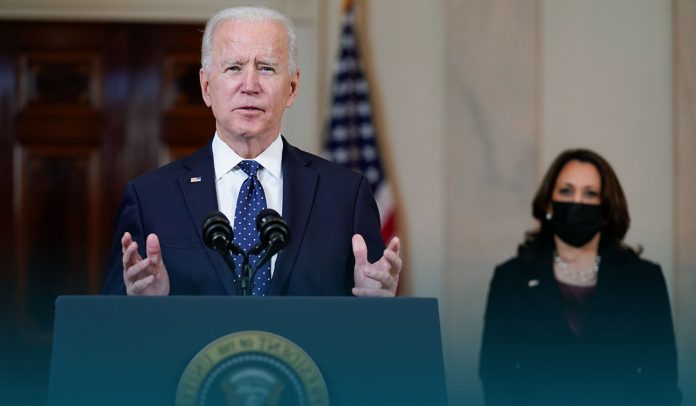 A White House spokeswoman said Wednesday that United States President Biden thinks the bar is too high for convicting violent American police officers and will use his speech to United States Congress in the coming week to push for police reform legislation.

Jen Psaki, White House Press Secretary, said that he believes the bar for convicting police officers is too high. It needs to be changed.

Police reform efforts are in focus following Tuesday’s conviction of former Minneapolis police officer Derek Chauvin in the 25th May 2020 death of George Floyd. Psaki said Mr. Biden backs a bill that would ban choke-holds and need that deadly force only be used as a last option in arrests.

That bill has passed in the U.S. House of Representatives, in which Democrats hold a clear majority but faces rough sledding in the closely divided United States Senate.

Jen Psaki told US President had discussed the legislation with legislators, including the Congressional Black Caucus members, when they met on April 20.

She said that the American President plans to use a joint session of U.S. Congress on April 28 to elevate this matter and discuss the importance of putting police reform legislation in place.

The event marks Joe Biden’s first hundred days in office with his most famous speech since his January 20 inaugural speech.

It also allows the government to cast light on an issue it describes as central importance but has taken a backseat to the administration’s response to the coronavirus pandemic and economic fallout.

Divided U.S. Senate voted to confirm Vanita Gupta as the leading woman of color to serve in the No. 3 job at the DOJ

The United States Justice Department (DOJ) launched a sweeping civil investigation into Minneapolis’ policing practices following the Derek Chauvin conviction, the government’s first significant its power use to intervene in local law enforcement agency jurisdictions where it has typically no direct oversight.

Attorney General Merrick Garland said that the Justice Department is still investigating whether the police officers involved in George Floyd’s death violated his civil rights. Such cases are principally hard to prosecute against officers.

In the meantime, a divided U.S. Senate voted to confirm Vanita Gupta as the leading woman of color to serve in the No. 3 job at the U.S. Justice Department, a role at the forefront of the DOJ’s renewed efforts to combat systemic prejudice in policing.