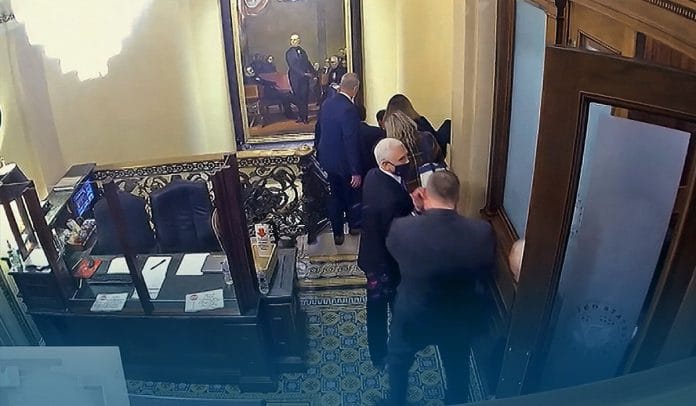 According to a source knowing the matter, along with the U.S. House Select Committee inquiring about the 6th JAN Capitol Attack, the U.S. Department of Justice (DOJ) owns raw video from a documentary film crew that followed Enrique Tarrio, the leader of the Proud Boys – a US far-right, neo-fascist organization that promotes political violence in America – on Jan. 6, 2021, before the deadly riot, before organization leader left D.C. under Court order.

Moreover, the person familiar with the matter said that the Goldcrest Films International team provided hours of raw footage from the day before the deadly attack, including footage from inside Capitol Hill.

The Goldcrest team picked up Proud Boys leader from Washington jail before the attack and recorded all of his actions on Jan. 6, including stepping around the Capitol building and chance meeting with founder of Oath Keepers, a US far-right and anti-government militia, Stewart Rhodes, who is experiencing federal charges, where the pair communicated briefly. Unfortunately, that video was the only encounter between the two that the movie-makers captured.

Two people familiar with the inquiry said that the January 6 Panel has started reviewing the video as part of its far-reaching investigation into the deadly riot on US Capitol Hill. The House Select Panel declined to give any comment.

Prosecutors unveiled on March 14 a new point regarding the Rhodes-Tarrio meeting and others at a Washington parking garage on 5th January 2021. While in the DC parking garage, the Proud Boys leader told a person that he’d cleaned all communications on his phone – an element the DOJ used recently to effectively argue he should stay in D.C. jail awaiting trial.

Furthermore, in the half-hour encounter between the two that day, a participant referenced the United States Capitol, prosecutors stated in their accusation past week against other leaders of Proud Boys.

According to the source, who has watched the footage, said that the video doesn’t disclose planning or any type of scheme to attack the seat of the U.S. government on 6th January. In addition, the US Justice Department subpoenaed the raw video and has been in possession for some months. It isn’t clear how long the House panel has had access to the footage. The Goldcrest Films International refused to give any comment on the DOJ and January 6 Panel having gained the footage.

On March 16, a United States federal judge ordered the DOJ to produce certain internal documents that might be regarding its decision to prosecute the ex-US President Trump’s advisor, Steve Bannon, who has been charged with contempt of U.S. Congress after he failed to obey the subpoena issued form Jan. 6 Select Panel.