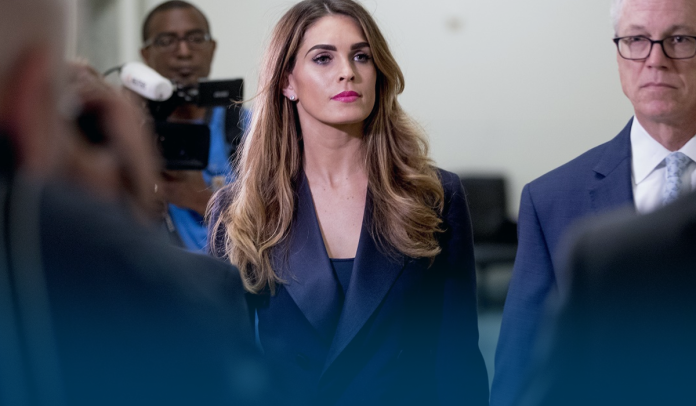 On Tuesday, Hope Charlotte Hicks, who served as the White House Director of Strategic Communications, sat for a ‘transcribed interview’ with the January 6th Select Committee, a bipartisan panel of the House of Representatives inquiring about the deadly insurrection on the United States Capitol, according to a source knowing the matter.

Previously, Hope Hicks had an informal meeting with the January 6th Panel, according to two persons familiar with the subject, and is being recalled for a formal sitting. CNN has requested the Congressional panel and the lawyer representing Ms. Hicks for a statement.

Moreover, in Tuesday’s interview, the former Counselor to President Trump told the committee that she informed Donald J. Trump he lost the Presidential election to Mr. Biden. However, she faced opposition for not accepting the 2020 election had been taken, according to multiple sources.

According to a book by the US journalists Susan Glasser and Peter Baker – originally published on 20 September 2020 – “The Divider: Trump in the White House, 2017-2021” the former President is cited as expressing: Well, Hope Hicks doesn’t believe in him. She reacted: No, she doesn’t, according to the book. However, she added that nobody had convinced her otherwise.

And according to another book titled “I Alone Can Fix It: Donald J. Trump’s Catastrophic Final Year” written by Philip Rucker and Carol D. Leonnig and published on 20 July 2021, ex-White House Communications Director told Mr. Trump on 9 November 2020: Look Sir [The President], she expressed apologies, adding that you aren’t going to win this election back. And he would lose the election.

According to media reports, Hope Hicks didn’t play a noticeable part in the final days and weeks the former President was in Office. The 6th January Committee has sought to prove throughout its inquiry, and televised hearing sessions that several people in Trump’s orbit didn’t accept the recent Presidential ‘election was rigged or taken’ or in the ex-President’s election-related falsehoods, and they conveyed that.

On October 21, the US House Select Committee issued a subpoena letter to Donald Trump’s attorneys requesting his testimony under oath and records associated with the January 6 insurrection. The inquiry panel has conducted interviews with over a thousand witnesses, including several White House advisors, and has maintained that Donald Trumps was frequently told by some of his top aides that he’d lost the Presidential contest. However, he continued to spread baseless assertions of extensive ballot fraud, and his violent followers who attacked the U.S. Capitol Hill reiterated them.