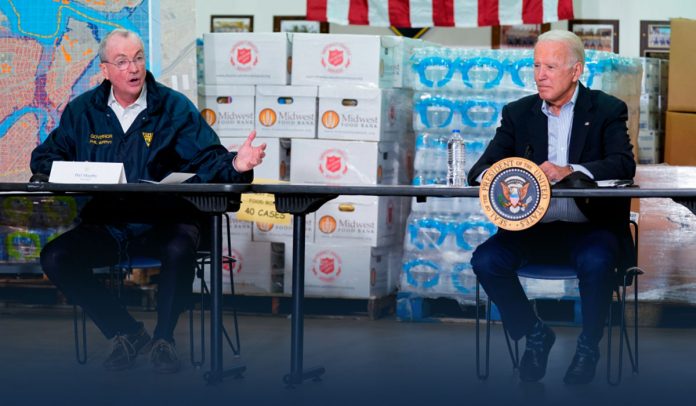 On Tuesday, Joe Biden, the President of America, called for climate control measures as he took the first glimpse at extensive damage in New Jersey and New York from recent week’s flooding rains and tornadoes born by the leftovers of Hurricane Ida. Biden declared climate change has reached ‘code red’ and become everybody’s crisis.

At a press briefing in an emergency center in New Jersey, the President cautioned that all parts of America are endangered by climatic changes and focused attention on infrastructure lawmaking he backs that is now pending before the United States Congress.

The U.S. leader declared Tuesday climate change had become everybody’s crisis as he made a trip to neighborhoods flooded b Ida remnants, cautioning it is time for the United States to get serious about the ‘code red’ danger.

Yesterday, I toured communities impacted by Ida in New Jersey and New York. As I told folks on the ground, we’re committed to supporting their recovery and to building back better with more resilient infrastructure. We won’t rest until the job is done. pic.twitter.com/BbK9je27tj

During the round-table discussion, flanked by Deanne Criswell, FEMA Administrator, and Phil Murphy, the governor of New Jersey, Joe Biden said they’re now living in real-time what the United States will look like.

Mr. Biden said they could not turn it back very much, but they could avoid it from getting worse, adding they’ve got to ensure that they do not leave any community behind.

On Monday, the US President approved significant disaster declarations for the New Jersey and New York parts most affected by the recent ferocious storm, freeing up financial aid from the federal administration.

The assistance would be available for companies and people in five New York counties and six New Jersey counties, where heavy rainfall bulged rivers, overwhelming sewage and drainage systems, and flooded several homes, roadways, and stores.

The ferocious storm took the lives of at least fifty people in six eastern U.S. states, including thirteen in New York, twenty-seven in New Jersey, after leaving a devastation trail and killing twelve in Louisiana.

The governor of New Jersey visited flood-damaged parts of Lambertville on the national Labor Day. He said that President’s disaster declaration would permit individuals to get financial aid, including amounts for temporary shelters and home repairs.

Moreover, Steven Fulop, Jersey City Mayor, said that damage to the infrastructure of the city was assessed at 35M dollars.

Kathy Hochul, the New York governor, said that an initial analysis depicted the storm affected over twelve hundred homes in the state and caused nearly 50M dollars in damage to public property.