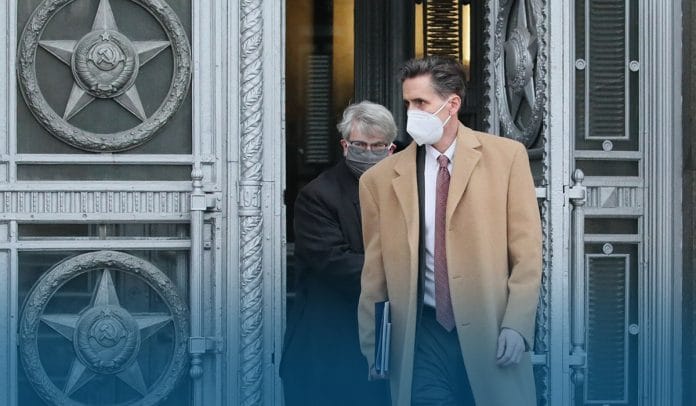 On Thursday, February 17, the U.S. Department of State said Moscow has expelled Bartle B. Gorman, the second-most senior diplomat at the U.S. Embassy in Russia, as American President Biden alerted that the Russian incursion threat remains very high.

The U.S. President warned there’s a ‘very high’ possibility that Moscow will attack its neighbor in the following several days. At the White House, Joe Biden told they’ve reason to believe that they’re engaged in a false-flag attack to have an excuse to invade. He added every indication they’ve is they are ready to attack the post-Soviet country.

As President Joe Biden and Secretary of State Antony Blinken warned of a Russian invasion of Ukraine, Russia expelled the deputy chief of mission at the U.S. Embassy in Moscow, the State Department confirmed.

According to Russia’s Foreign Ministry, the No. 2 U.S. official in Moscow was compelled to leave Moscow in response to what it called an ‘escalatory action’ at a time of high alert over the crisis along the Ukrainian border.

Furthermore, Ned, Price, the State Department spokesperson said in a statement that the Russian move against the US Deputy Chief of Mission was unprovoked, and they consider that an escalatory action and are considering their response, evoking the possibility of ‘responsive expulsions’ from the Embassy of Russia in Washington.

The statement continued that they asked Moscow to end its unsupported expulsions of American diplomats and staffers and to work effectively to reconstruct their missions. And now, more than ever before, it’s grave that their countries have the essential diplomatic personnel in place to smooth communication between the two governments.

The U.S. State Department said DCM Gorman had a valid visa and had been in Russia for about 3-years. The Russia’s Ministry of Foreign Affairs confirmed the unprovoked move and said it came in reply to the United States’ orders for Russian envoys to leave America by the end of January.

According to the Russian Ministry’s website statement, spokeswoman Maria Zakharova said that the US official was indeed ordered to leave Moscow, but firmly in response to the unfounded expulsion of the Minister-Counsellor of the Russian Embassy in Washington, in spite of his high-ranking position.

The US State Department said in last December that several Russian envoys who had been in Russia for over 3-years would be required to leave the land, with one batch compelled to depart by the end of last month and another due to leave by June’s end. Simultaneously, Ned Price said that the action wasn’t punitive and was envisioned to enable greater equality between Russia and American bilateral missions.

The expulsion of Gorman comes as America and the Western military alliance cautioned that Moscow is planning for an incursion and increase its military presence along the Ukraine border, in spite of Russian vows earlier in the week that it was pulling out troops.