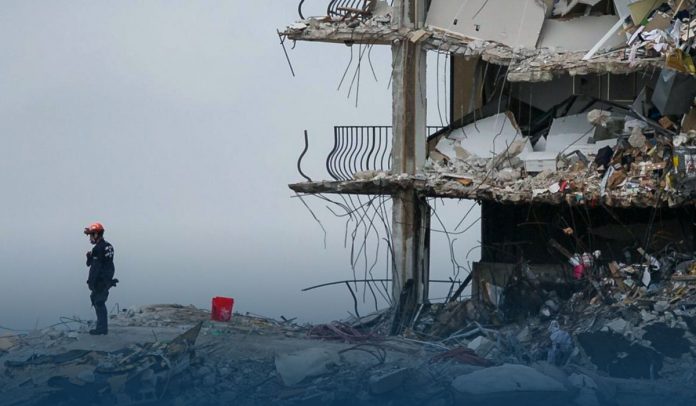 Search and Rescue operation for the fifth day for possible survivors of a Florida condo 12-story building collapse used heavy machinery and bucket chains on Monday as they worked on the top of the dangerous debris heap of twisted steel, pulverized concrete, and remains of dozens of households.

Officials said that efforts are still a Search-and-Rescue operation (SAR), but no one has been recovered alive since hours after the downfall Thursday. Two more bodies were found on Monday, bringing the death toll to eleven.

Later, they were identified as fifty-year-old Michael David Altman and fifty-year-old Frank Kleiman in a Miami-Dade law enforcement release. Moreover, the news release mentioned fifty-two-year-old Marcus Joseph Guara as one of the bodies found Saturday. Over 150 are still missing in the Surfside community.

Biden says he’s waiting for Florida Gov. DeSantis to declare an emergency for federal resources to respond to the Miami Beach condo collapse, which has left dozens of people unaccounted for

“To the people of Florida — whatever help you want, the federal government can provide” pic.twitter.com/bo3Y8zjA5N

The structural collapse of the twelve-story building left layer over layer of interweaved remains, thwarting efforts to reach anyone who might have survived.

During the news conference Raide Jadallah, Assistant Fire Chief of Miami-Dade, said that every time there is an action, it gets a reaction. It isn’t a matter of they could only attach a pair of chords to a concrete part and lift it and call it a day. Several of the concrete parts are smaller, like the size of baseballs.

He said that it would take time, and it isn’t going to happen overnight; that is a 12-story structure collapse.

At a news conference On Monday, Representative Debbie Wasserman Schultz said that she anticipates the agency’s preliminary analysis would find that a full inquiry is merited.

Working all day and night

As a fact-finding agency, Wasserman Schultz said the National Institute of Standards and Technology (NIST) would help US Congress adopt changes in the federal law to ensure that when the buildings are built so that something like Florida condo building collapse could never happen in the future.

Moreover, she noted that they have structures like that all the way up the coastline of America.

The friends and family members of victims continued their visits Monday. Over twenty-four family members observed teams of searchers excavate the building place. Some cling to each other for help and support, while some took photos. Other people hugged and prayed for their loved ones.

A deputy Incident Commander with Miami-Dade Fire, Andy Alvarez, told ‘Good Morning America’ that rescuers have been capable to discover some spaces inside the debris, mainly in the parking garage and in the basement.

Alvarez said that they have been able to find a tunnel through the structure.

Moreover, Alvarez said they have more than eighty rescuers at a particular time that are splitting the collapsed walls in frenzied effort to rescue possible survivors and to get to those spaces they typically know exist in those structures.

Ricardo Aizenman said that they are still working round the clock, and they are hopeful for a miracle.