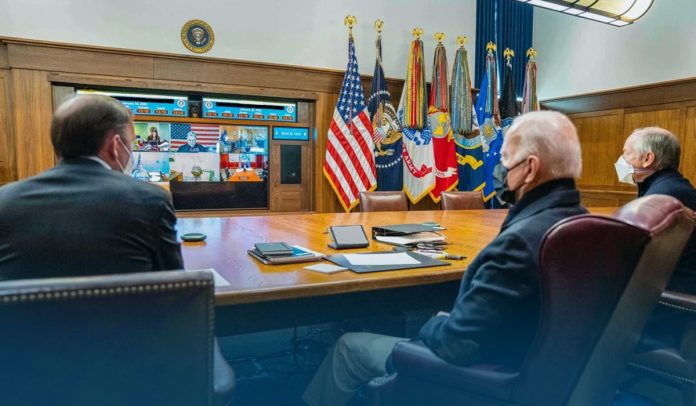 On Sunday, the United States Department of State ordered the withdrawal of eligible family members of the staff of the U.S. Embassy Kyiv, quoting the threat of military operation from Moscow. The State Department also permitted the voluntary departure of the American government workers and said U.S. citizens should consider leaving immediately.

The officials of the Department said that the actions were performed ‘out of an abundance of caution,’ but that America ‘wouldn’t be in a position’ to pull out Americans should Moscow invade Ukraine. The Russian Federation has deployed nearly one hundred thousand forces close to the border of the bordering country.

Moreover, the State Department is asking Americans in Ukraine to consider leaving the country now using commercial or other privately possible transportation opportunities. The Department reissued its “Level 4: Do Not Travel” Warning for Ukraine, saying: don’t travel to Ukraine amid increased threats of Russian armed action and COVID-19. Earlier, the travel warning had also been at Level 4, amid coronavirus.

On Sunday night, the State Department also re-released a travel advisory regarding travel to Russia, saying: don’t travel to Russia amid continuing tension along the Ukrainian border, the potential for harassment against American citizens, the limited ability of the embassy to assist Americans in Russia, COVID, and associated entry restrictions, harassment by Russian administrative security authorities, and the arbitrary enforcement of local law.

.@SecBlinken: If Russia invades and occupies Ukraine, what’s next? It may seem like a distant regional dispute or yet another example of Russian bullying. But at stake are principles that have made the world safer and more stable for decades. pic.twitter.com/pEl06Ai14P

When asked about the timing of these movements of 23rd January in D.C., a senior official of the State Department told the media they confront the backdrop of reports Moscow intends significant military operation against the East European country.

Furthermore, according to the State Department official, security situations, particularly along borders of Ukraine, in Russia-occupied Crimea, and in Russia-controlled eastern Ukraine, are unpredictable and can worsen with a short order. And Joe Biden, the U.S. President, has said a Russian Armed Forces’ incursion of the foreign Soviet Republic could happen at any time, and if there’s an aggression, the United States Embassy in Ukraine would’ve limited ability to help U.S. citizens who might to leave Ukraine.

In addition, the State Department said in its travel advisory, U.S. citizens in Ukraine should be aware that Russian armed action anywhere in the East European country would severely influence the U.S. Embassy’s ability to deliver consular services, including support to Americans in leaving the country. And visa processing and many other consular services at the embassy will remain for the time being.

US’ Larger Mission in Europe

The United States embassy is one of the larger missions in Europe. In total, it has around nine hundred employees, the majority of them Ukrainians, some of whom have been with the mission since it opened thirty years before. The officials also said they didn’t know how many U.S. citizens are now in Ukraine.

According to the New York Times report late Sunday, the U.S. President was considering stationing thousands of American forces to North Atlantic Alliance allies and partners in the Baltics and Eastern Europe. The U.S. Defense Department declined to give any comment on the report. However, John Kirby, the Pentagon spokesman, said Friday they’re going to ensure that they’ve options prepared to reassure their partners, especially on Eastern Flank countries.