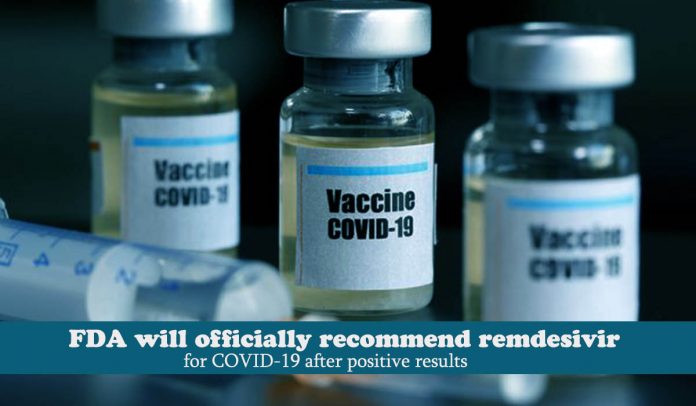 Scientists released good news about a potential treatment for COVID-19 on Wednesday by sharing their experimental trials of drug remdesivir with satisfactory results. The drug might help coronavirus patients to recover quickly. The United States Food and Drug Administration (FDA) not officially approved any drugs for the treatment of infection. But according to The New York Times, it plans to recommend an emergency-use authorization for drug remdesivir.

Researchers released some good news about a possible treatment for coronavirus Wednesday — evidence that the experimental drug remdesivir might help patients recover more quickly from the inf…​ https://t.co/jrOgnMl7P2

The FDA says in a statement to CNN that it is in the process of dialogues with Gilead Sciences, the manufacturer of remdesivir, about enhancing the availability of the drug to patients. Michael Felberbaum, the spokesperson of FDA, stated that as part of the commitment of the FDA to accelerating the development as well as the availability of possible coronavirus treatments. The federal agency of the United States engaged in talking with Gilead Sciences about manufacturing remdesivir and its quick availability to patients as early as possible.

The U.S. government-funded research found that coronavirus patients who took remdesivir dose recovered more quickly than patients who didn’t. The federal officials tried to give any hope to its people in a fatal pandemic that infected over one million and killed more than 61,500 Americans. Moreover, the head of the National Institute of Allergy & Infectious Diseases showed its optimistic gesture about the results of the drug.

According to the statistics, remdesivir showed a definite, noteworthy and positive effect in lessening the time towards recovery from the deadly coronavirus, Dr. Anthony Fauci expressed during a meeting with Donald Trump at the White House. Outcomes from the initial trial demonstrate improved recovery time for COVID-19 patients from fifteen to eleven days. The similar results that the Tamiflu drug has on flu. Tamiflu also does not cure influenza patients quickly but can reduce how long they are sick.

However, a thirty-one percent improvement of remdesivir does not seem like a knockout hundred percent, and it is a very crucial proof of concept, Fauci adds. It demonstrates that the drug can block this virus. Remdesivir also may lessen the possibility that patients will die. The NIAID said that the results also recommended a survival benefit, with a death rate of eight percent for the group receiving remdesivir versus 11.6% for the placebo group.

Usually, the statistics about the effectiveness of drugs would not release this early from the initial trial. However, whenever one has a piece of strong evidence that a drug works efficiently, then he has a moral obligation to let the people instantly in the sample group know so that they can have access to it. Among several other drugs, remdesivir also being tested against novel coronavirus, but the NIAID trial is the primary conducted according to guidelines intended at gaining the approval of the FDA.

Around 11,00 people participated in the Remdesivir trial

Fauci said around eleven-hundred people participated in the drug trial internationally. He called it the first actually successful randomized sample-controlled trial. However, the World Health Organization (WHO) denied commenting on the remdesivir trial results that released on Wednesday. The technical lead of WHO for the COVID-19 response, Dr. Maria Van Kerkhove, says that at present, the world has no such study that will come out as a game-changer.

Maria said the agency usually pulls together evidence from many pieces of research before reviewing and evaluating the evidence. The managing director of the health emergency program of WHO, Mike Ryan, said it need sometimes several publications to find out the final impact of any drug.

On Wednesday, the primary investigator behind the clinical trial tell Elizabeth Cohen of CNN that remdesivir is not the ultimate treatment for novel coronavirus. The researchers have to work more, and they are looking for other therapies. Moreover, this trial is going to continue.

Dr. Andre Kalil adds that shortening a stay of patients at the hospital is important because patients with a longer stay at hospitals are at greater risk for complications, specifically if a patient needs respiratory support. Four days in a hospital as a clinical expert is not only significant but very meaningful, and it will matter to patients as well as to him.

Smaller trial for the Drugmaker

Gilead Sciences also released its own research from another trial of the drug on Wednesday. According to the company, it found patients who took remdesivir for five days did well as compared to those who took for ten days. They do not test remdesivir against placebo to observe whether it was an effective treatment for the coronavirus – further pieces of evidence need to prove that. The study used around three hundred and ninety-seven patients with severe COVID-19 symptoms.

The company adds that the most common adversative events in over ten percent of patients in some of the age groups in the Gilead trial were acute and respiratory nausea failure. Sonia Choi, the spokeswoman of Gilead, stated that the company prioritized making of additional remdesivir over a placebo early in the outbreak and prioritized the placebo for specific studies.

The goal of the company with these studies was to find the answer to how long the duration of the treatment, comparing effectiveness and safety with five or ten days of remdesivir treatment. Control of the placebo was not important to answer this question. The open-label research was essential to understand whether lessening the therapy duration can lead to quick discharge from the hospital.

The study extended and conducted at one-hundred and eighty locations across the world, including in China, the United States, the United Kingdom, and France. Daniel O’Day, the chief executive officer of Gilead, said in a letter that the company’s existing supply of the drug could cover around one lac and forty thousand treatment courses for patients with coronavirus disease. The estimation made on ten days of treatment with remdesivir.