The world’s largest and longest twin-engine airplane, the Boeing 777-9X finally took its maiden flight, enlightening a light for the United States aviation firm following months of grim news. On Saturday morning, after some days of dreadful weather, airplane WH-001 took from Paine Field, home of the wide-body factory of Boeing, north of Seattle. The first flight of gigantic airliner postponed twice earlier in the week due to bad weather conditions, but as the plane taxied past the press viewing zone ahead of takeoff, suddenly a rainbow appeared – offering a positive sign.

At the moment of the final flight, WH-001 received a light eight-knot tailwind, with six miles visibility, and broken clouds at about three-thousand feet as it rocketed down runway 34 Left at around 09:08 a.m. local time. As the new flagship of Boeing rapidly gathered speed, it left flow of spray in its wake. After just thirty seconds of takeoff, the behemoth rotated elegantly into the skies. The excited and relieved crowd break out into a thunderous round of applause, yet it masked slightly by the work of the roaring engines.

Boeing 777-9X designed to bring 425 passengers on routes of around 7,600 nautical miles – a distance that would cover pro-long routes – expected to become one of the key aircraft of Boeing in the upcoming years. Though, the uncertainties because of deadly Boeing crashes that resulted in the grounding of Boeing 737MAX series globally, cast a shadow over the future of the manufacturer. On Saturday, once airborne, the first flight of huge plane swallowed quickly into the skies as it led north out of uninhabited areas and the Washington Coast on the path of the flight chosen for safety reasons.

It gained at an altitude of fourteen thousand feet and turned back east where it goes in looping patterns over the central state of Washington and finally passenger service over the coming eighteen months. The difficulties Mother Nature created in its path for the maiden flight could easily see as a sign for Boeing and the whole program.

Official Statement of Boeing on First Flight of 777-9X

This major milestone for the #777X airplane program begins the next critical phase of testing as we work towards certification and then delivery to customers in 2021. https://t.co/PP89sL3CSt

The Boeing congratulates its customers on its official account of twitter on the successful and safe maiden flight of 777X. In another tweet, the company said that after achieving their major milestone, the airliner initiated the next critical testing phase as they work towards certification and afterwards delivery of #777X to their customers in 2021.

One day before the flight, with cloud top limit down to two thousand feet, rain with winds gusting up to around 29 knots, over ten thousand disappointed employees, VIPs and journalists shivered for about five hours whereas the giant 777-9X sat tormenting just off the runway, waiting for final clearance call to takeoff.

At 01:30 p.m. Friday with weather conditions not improving and the window of flight closing, her first sortie scrubbed. Almost it’s a history that the first flights of Boeing occur in abysmal weather conditions, but this is for the first time in memory that a flight cancelled because of elements.

The world’s longest airliner and largest twin-jet,Boeing’s new flagship 777-9X successfully made its maiden flight. And provided the reeling company a needed morale boost. Here’s my story for @cnntravel Special thanks to @brandonsblog for his awesome pics. https://t.co/7fxEf6qfsD

In routine, the flight of the newest airliner is a source for celebrations. Events like these may happen twice a decade. But in the case of Boeing, these are something but usual times. After two deadly crashes of the 737MAX, the constant grounding of most important aircraft of Boeing – that reportedly responsible for forty percent profit of the company – provoked one of the 104-year-old biggest ever crisis of airframer.

The effects of grounding 737MAX felt all over the aerospace industry of the world and majorly on the economy of the U.S. According to some estimation, the MAX grounding may cost 3rd to half a point loss in the GDP short-term of the United States economy. The production of MAX is at a standstill state, along with the revelation of Boeing earlier this week that it doesn’t expect the United States Aviation Administration to re-certify the 737MAX as safe to fly until June or July 2020, the timing was tough for the new Boeing airliner to the skies.

However, there is continuous rumour of a new airplane of Boeing to replace the 757/767 as a middle of the airliner market or the 737MAX with the future small aircraft, Boeing doesn’t announce new models beyond the 777X. Bringing an overall new airliner to the market takes a minimum of five to seven years. The program of 777X launched in November 2013, the successor to the most successful airliner with wide-body ever built: the 777, that first started service around twenty-five years ago. The 777X airliner is chock full of superlatives.

With 252 feet long, the variant 777-9 is the longest passenger airliner ever built in the history. With a fuselage stretch of about 9.4 feet over its precursor 777-300ER, the 777-9 is able to house three extra economy seat rows ten abreast, for a total of 426 passengers in a usual two-class configuration. Moreover, it had an increase range of 7,285 nautical miles – 220 miles greater than the aircraft it replaces.

777-9X appears as the Record Breaker 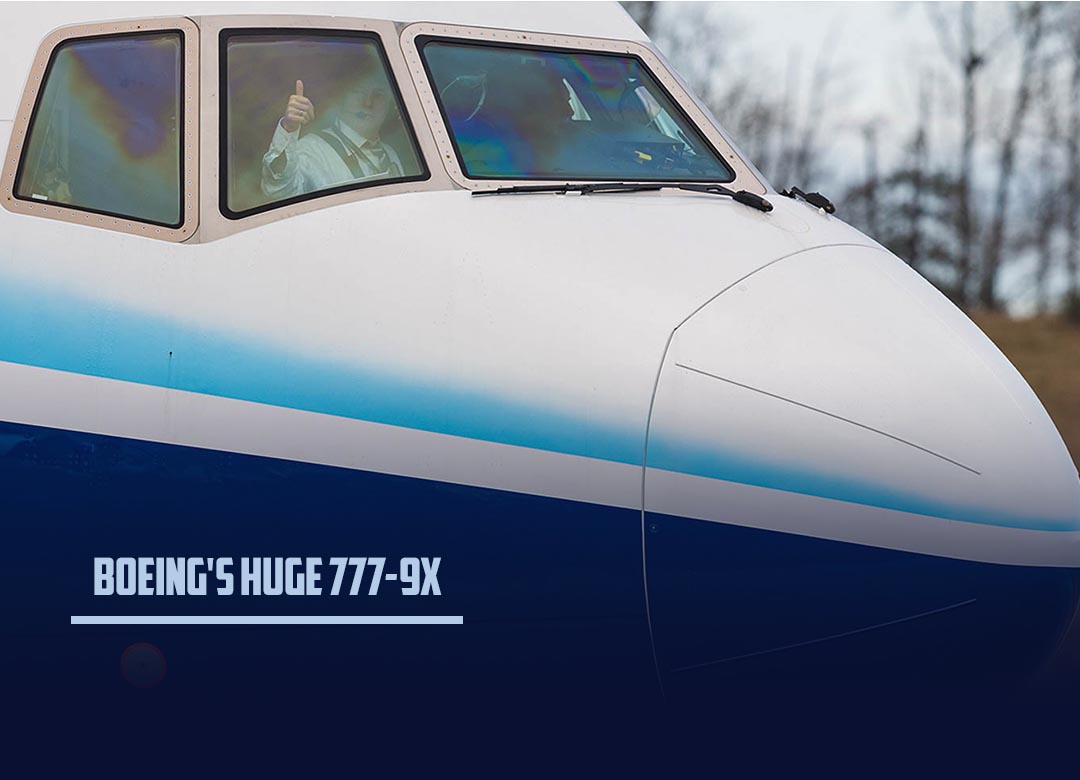 The 777-9 is the only largest airliner in the world in terms of passenger capacity. It’s major competitor, A350-1000 of Airbus proportioned more like the 777-300ER smaller. To carry the extreme takeoff weight of 775,000 pounds into the air, Boeing manufactured a new carbon-fibre-reinforced polymer wing along with a wingspan of around 233 feet, with raked wingtips. Separately each wing is the world’s largest single complex structure. Underneath the wings are the most powerful and the largest engines General Electric GE9X, ever equipped on a commercial aircraft.

These built an unbelievable 105,000 pounds of thrust separately while dropping the fuel burn by ten percent from their forerunner GE90 engine. The diameter of engines is as big as a 737 fuselage. Because of their immense power demands and cutting-edge design, design flaws in the engines’ compressor, is a significant factor for the delaying of the first flight if 777X from 2018 to 2019 and then to this year 2020.