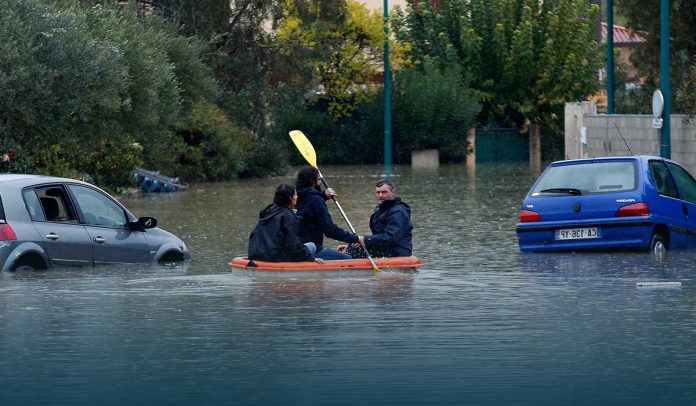 Two people died, and around twenty-five people are still missing after a strong storm hit north-western Italy and south-eastern France. The Alex storm took fierce winds and heavy rain. Many villages north of Nice in France faced serious damage from deadly floods and landslides, with homes, bridges and roads destroyed. The flooding in north-western Italy described as historic. Moreover, a part of the bridge over the Sesia river collapsed.

At least two people have died and 25 are missing after #StormAlex hit border regions of Italy and France with torrential rains. Italian Red Cross volunteers and staff are working alongside Civil Protection to assist people affected by landslides and floods. @crocerossa pic.twitter.com/eoLYMo2Sfn

Jean Castex, the French Prime Minister, deployed the army in the country and released emergency funds to tackle the fatal floods of the decades in South-eastern France. At least twenty-five people are either missing or not with their relatives. Mr. Castex says that authorities are not aware of too many people.

Meteorological agency Météo-France said that 17.7 inches (450 mm) of rain fell in some regions over twenty-four hours – the equivalent of almost four months at this time of year. The southern Alps area seemed like the worst-hit region, with serious damage and destruction in the Roya, Tinée, Vésubie, and Esteron valleys. The villages of Rimplas and Saint-Martin-Vésubie also lost their road connection with other areas.

The storm also knocked on the western Atlantic coast of France on Friday, causing a large number of homes to lose power. Winds of over 112 mph (180 km/h) recorded in Brittany on Thursday and Friday.

The two deaths were a fifty-three-year-old firefighter in the Aosta Valley who lost his life during a rescue operation, and a thirty-six-year-old person whose car swept into the river in the Piedmont area. However, his brother luckily managed to escape from the car. A part of a key bridge over the Sesia river in Vercelli collapsed soon after it had reopened on Saturday.

In the rest of Piedmont province, numerous villages lost their land connection after the rains. The officials described the overall situation as critical. Alberto Cirio, the Piedmont President, told La Stampa that 630 mm of rain fallen in twenty-four hours, an amount unheard of since 1954. Hundreds of relief workers sent to help rescue efforts in the cut-off villages. Moreover, the storm affected the north-western regions of Liguria and Lombardy. Likewise, the Roja river in Ventimiglia also flooded with plenty of water.

On the other hand, flood alerts remain for regions of the Po river, which swollen by 3 m in twenty-four hours. The aid workers rescue almost twenty-five people reported missing by Italian authorities just over the France border. Fortunately, the city of Venice successfully protected by a flood barrier system and recently declared fully operational.