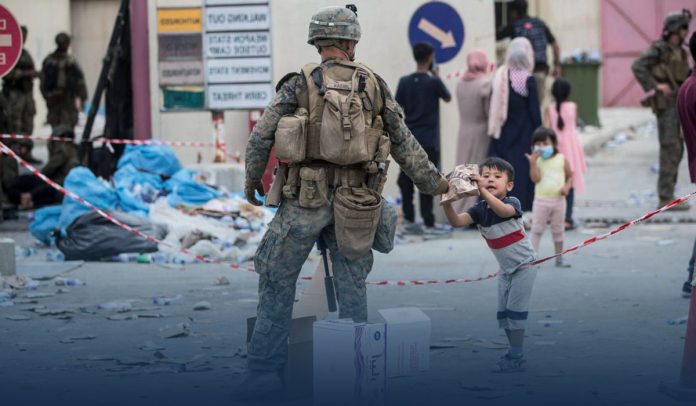 On Monday, a gun battle outside the Hamid Karzai International Airport killed one Afghan soldier, highlighting the risks of evacuation efforts as the Afghan Taliban cautioned that any action by American forces to extend Biden’s mandated withdrawal date to give people additional time to leave the country would provoke a reaction.

The statements were made after a deadly firefight between unidentified shooters and German, the United States, and Afghan guards at the international airport left one Afghan soldier dead and three injured, underlining the brittle security condition around the location and throughout the Afghan capital Kabul.

The Afghan Taliban have cautioned that there would be reaction and consequences if America and its allies delayed their troops’ withdrawal from Afghanistan, as uncertainty continued to overwhelm the International Airport in Kabul, with a deadly firefight on Monday at one of the Kabul airport’s gates.

Can’t rule out who the hostile actor was in the shooting incident last night. You saw central command statement referred to as a hostile actor. One Afghan soldier was killed & several wounded (during an exchange of gunfire outside Kabul airport): Pentagon Press Secy John F Kirby pic.twitter.com/xrHXhQXPT2

The firefight erupted as the Afghan Taliban to bolster their position and eliminate pockets of armed defiance to their swift takeover earlier in August. Moreover, the Afghan Taliban stated they regained three districts in the north of Kabul captured by Afghan opponents the day before and had surrounded Panjshir province.

The security forces of Afghanistan collapsed in the face of the Taliban development, in spite of two decades of Western assistance and training.

Since then, thousands of Afghans have sought to leave the country, fearing a reappearance to the brutal Taliban rule they imposed the previous time they ran the Islamic Republic of Afghanistan. That has led to uncertainty at the main only route out of Afghanistan, Kabul’s international airport.

President Joe Biden hasn’t ruled out extending the evacuation beyond the 31st August deadline set for completing the withdrawal of American troops. But Suhail Shaheen, the Taliban spokesman, said in an interview that 31st August is a red line and that if America chose to extend its presence in Afghanistan would provoke a reaction.

White House officials said that twenty-eight American flights transported nearly 10400 people to safety out of war-torn Taliban-led Afghanistan over the past twenty-four hours, and fifteen C-17 flights over the coming twelve hours ferried another 6660.

Furthermore, the Taliban blame the chaotic exodus on the American military and say there’s no need for Afghans to flee the country. They’ve also promised to bring “peace and security” in the country after several years of war and say they will not hunt for revenge on those who supported America, NATO and toppled the Afghan administration.

Heiko Maas, the German Foreign Minister, described the circumstances at the Kabul airport as becoming increasingly chaotic and stated Germany had been in touch with Turkey, the United States, other associates, and the Afghan Taliban, with the intent on facilitating a civil operation of the airport to allow the evacuation beyond 31st August.