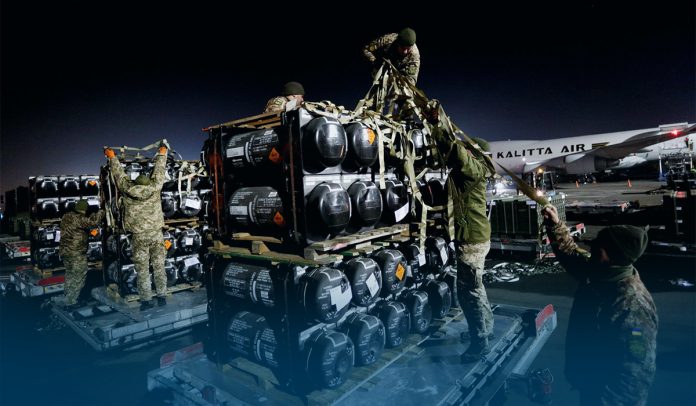 As the US President approved a dramatic expansion in the scope of weaponry and equipment being provided to Ukrainian forces, Moscow sent an official diplomatic note to the US State Department demanding the US to halt sending security and military assistance to the government in Kyiv.

Earlier this week, Russia sent the note, known as a demarche, warning that America and NATO deliveries of the most sensitive arms to Ukraine were fueling the brutal war there and could bring unpredictable consequences.

US: ‘Nothing will dissuade’ us from supporting Ukraine.

The Washington Post reported that it had a copy of a diplomatic note sent by Russia to U.S. claiming that U.S., NATO shipments of the “most sensitive” weapons to Ukraine could bring “unpredictable consequences.”

The note was sent as the President Biden administration prepared itself to proclaim the latest security aid package for Ukraine worth 800M dollars that includes eleven Mi-17 helicopters, eighteen 155mm Howitzers, and Switchblade 300 drones.

Earlier in April, the U.S. State Department declared that the President Biden government had sent over 1.7B in assistance to Ukraine since the brutal incursion started on 24the February.

According to the source having knowledge of the Russian diplomatic note, it was expected that the Kremlin would demonstrate the weapon deliveries, and it was still uncertain whether it meant Moscow would modify its behavior in any way. But this person acknowledged that the demarche could signal a more violent Moscow posture against America and the Western military alliance as the brutal conflict continues.

A U.S. official told the reporters that the note from Moscow shows the effectiveness of types of US weapons delivery to Kyiv. Moreover, the official proposed that the Russians were concerned by the latest declaration, containing heavier duty weapons and equipment. According to a senior American official, some officials from the Joe Biden government anticipate that the Russian notice shows the Russians are hurting.

The official continued that the Russians wouldn’t have sent that message if they sensed they’re in a stronger place on the battleground. Previously, the media reports stated that America anticipated the Russian leader’s risk tolerance had elevated and that he might be ready to take more violent and brutal action against the United States in response to its support for the East European country.

When requested for remarks, another US official said that they wouldn’t confirm any private diplomatic correspondence. However, the Official added: what they could confirm is that, along with Western partners, they’re providing Ukrainian people with substantial military aid, which their Ukrainian allies are using to exceptional to defend their land and people against Moscow’s unjustified all-out attacks and terrible acts of violence.

According to the senior US defense official, the first flight from the United States of the latest 800M dollars security assistance for the embattled country is likely to arrive in the coming 24-hours. The official continued that the aid material would be picked up at the border and taken into the country by the Ukrainians.