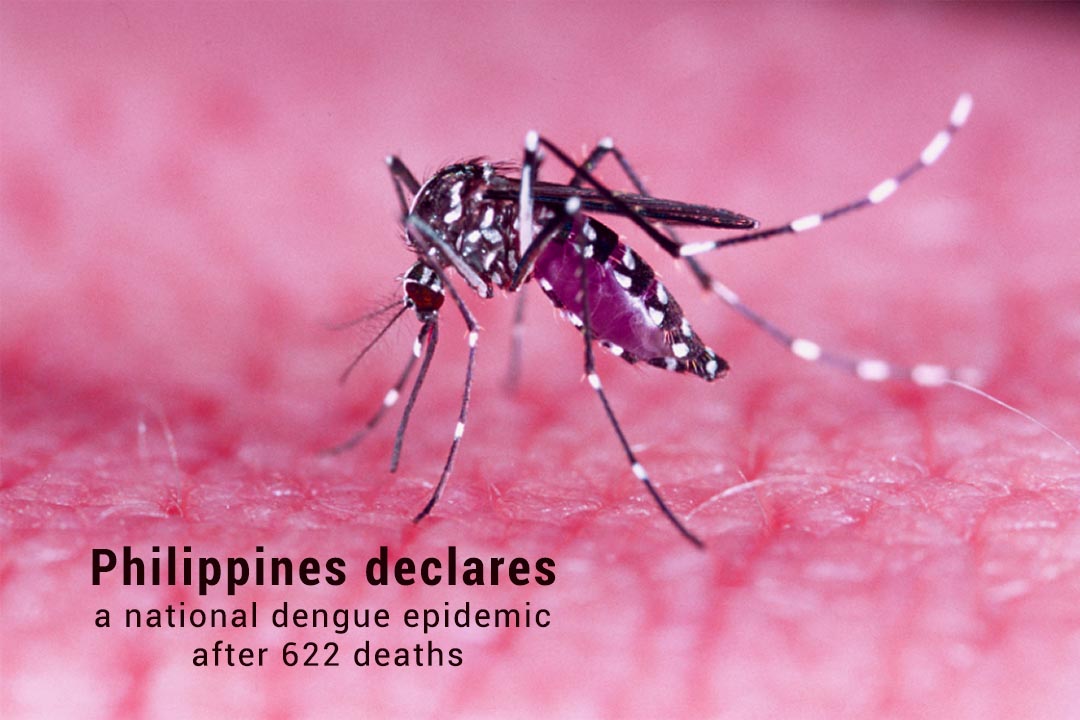 After 622 deaths since January in the Philippines due to the dengue fever, the officials declared a national dengue epidemic alert. Whereas, several lives are at high risk due to this mosquito-borne disease. The Philippines Department of Health stated that over 146,000 cases registered till the 20th of July and it is an increase of 98% from the same duration during last year.

Dengue has flu-like symptoms with muscle and joint pains, piercing headaches along with full-body rashes. According to the shared information from World Health Organization (WHO), among worldwide millions of infected people, every year about five lac people have serious symptoms with hospitalization mediatory due to which 12,500 people lose their lives, unfortunately.

According to CNN Philippines, the country announced a national dengue fever alert last month after the death of 450 patients due to the disease. The disaster becomes a nationwide epidemic with about two hundred more deaths in the previous month. Moreover, the health minister stated that the reason for declaring a national epidemic is to identify the areas which needed a localized response immediately.

Francisco Duque, Health Secretary, said in a statement that it is necessary to declare national epidemic in these areas to find where a localized response required after which enable the units of local government to practice their Quick Response Fund to tackle the epidemic condition.

In Which Regions Epidemics Declared?

The officials of the Philippines declared epidemics in seven regions out of the seventeen overall regions of the country. Those regions are Northern Mindanao, Eastern Visayas, Western Visayas, Calabarzon, Mimaropa, Zamboanga Peninsula and Bicol. Together, these declared regions are home to over forty million people, which is about forty percent of the total Philippines population.

Some other regions such as Ilocos and Central Visayas are also at high risk as thousands of dengue cases reported; however, no epidemic threshold past yet. At a press conference, Duque said about the epidemic that as according to their statistics, 5,100 cases recorded as an average per week. And it is a really shocking situation as well as it is going as a record digit.

Since the last month, health officials of the Philippines are working to overcome the spread of the viral infection. According to the Department of Health, they set up several doctors as well as nurses at provincial and district level hospitals and delivered emergency funding to the affected regions along with other measures.

Philippine is the first Asian country to approve the Dengvaxia vaccine use, the first and only licensed vaccine of the world for dengue fever. Sanofi Pateur, the French pharmaceutical firm, is the manufacturer of this vaccine and launch it in 2016. As part of school-based immunization program of the government, the drug distributed among above 800,000 students. Whereas, in 2017, the drug suspended after the clinical trial statistics revealed that it might consist of accidental consequences in non-affected patients.

National Disaster Risk Reduction and Management Council’s spokesman, Mark Timbal said that instead after the epidemic, the government of the Philippines has no urgent plans to restore the vaccine for the patients.