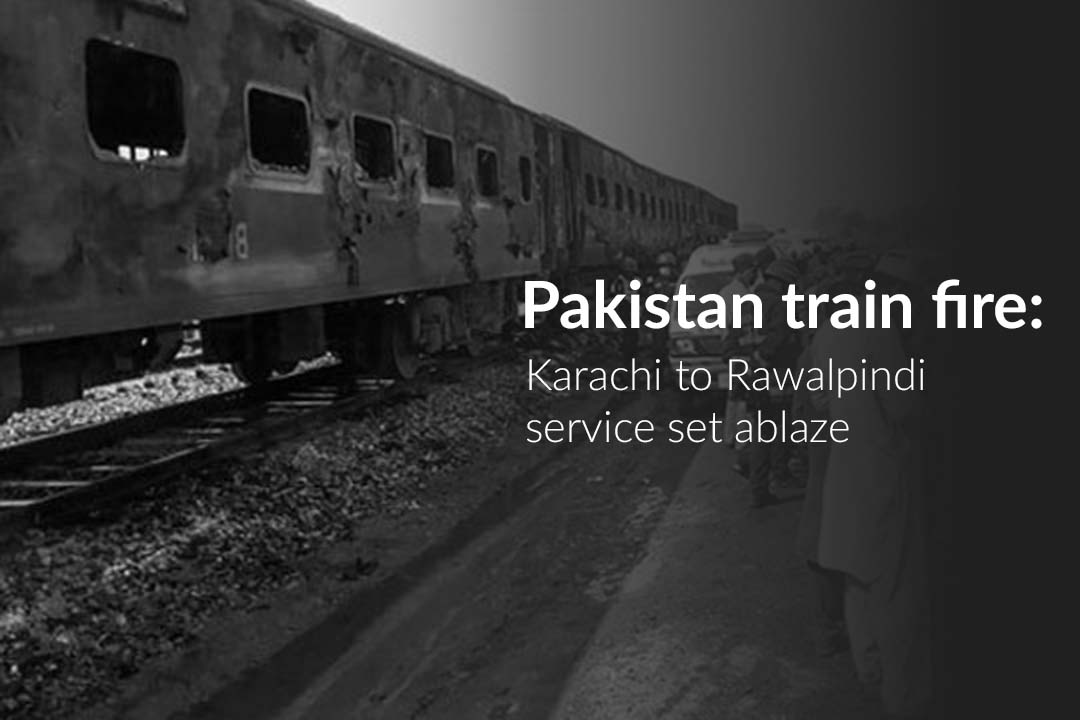 Sheikh Rasheed Ahmed, Pakistan Railway Minister, said that Tezgam (passenger train) caught fire after the explosion of a gas cylinder. A passenger was preparing breakfast on the cylinder when suddenly it exploded. The blaze rapidly spread to about three bogies of train. According to the concerned officials, several victims lost their lives when they tried to jump off the burning train. Dr. Yasmin Rashid, the Punjab health minister, stated that because of the incident, over 73 people lost their lives, and 40 got injured severely.

Women and children are also among the accident victims, and many of them are unable to identify. They have injured as well as dead bodies shifted to DHQ Hospital, Liaqatpur, whereas some of the injured transported to Bahawal Victoria Hospital in Bahawalpur because of their serious condition. The train was on the route from Karachi to Rawalpindi. The authorities say that the fire caused due to the cylinder blast. Furthermore, Railways Minister Sheikh Rasheed says that they belonged to Tableeghi Jamaat (Religious group), who was on the way towards Raiwand, Lahore. Several people saved their lives in the incident by jumping off the moving train.

Statement of an eye witness

Whereas, eyewitnesses traveling on the same train claimed that the incident happened due to the electricity short-circuit on the train. He added people informed the concerned authorities in the night to check and resolve the issue when they smell the odor of burning wires. But unfortunately, they didn’t respond to their complaints. He describes that he was in boggy number fourteen. Their companion was delivering an Islamic preaching lecture after namaz-e-Fajar when they listen to the scary noise that boggy number twelve caught fire due to short circuits. After that, fire moves towards boggy thirteen within no time. The train traveled about two to three kilometers in the fire state, and several people jumped over the moving train. Among those some lost their lives, some got severe injuries, and few lucky people saved their lives.

On the other side, a Railway official, Nabila Aslam, told news channels that the passengers must have hidden a stove cylinder in their clothes while boarding the train.  Whereas, carrying a gas cylinder or any other burning material is strictly against the state laws. Rescue 1122 (state-owned rescue department) teams, along with other firefighters, reached the spot and extinguished the fire and carried out cooling and search operation under the supervision of railway minister. Moreover, Inter-Services Public Relations stated that Pakistan Army troops, including paramedics and doctors, also dispatched to support rescue teams in the operations. It added, an Army helicopter from Multan also took part in the rescue operations to shift serious injured to faraway hospitals. 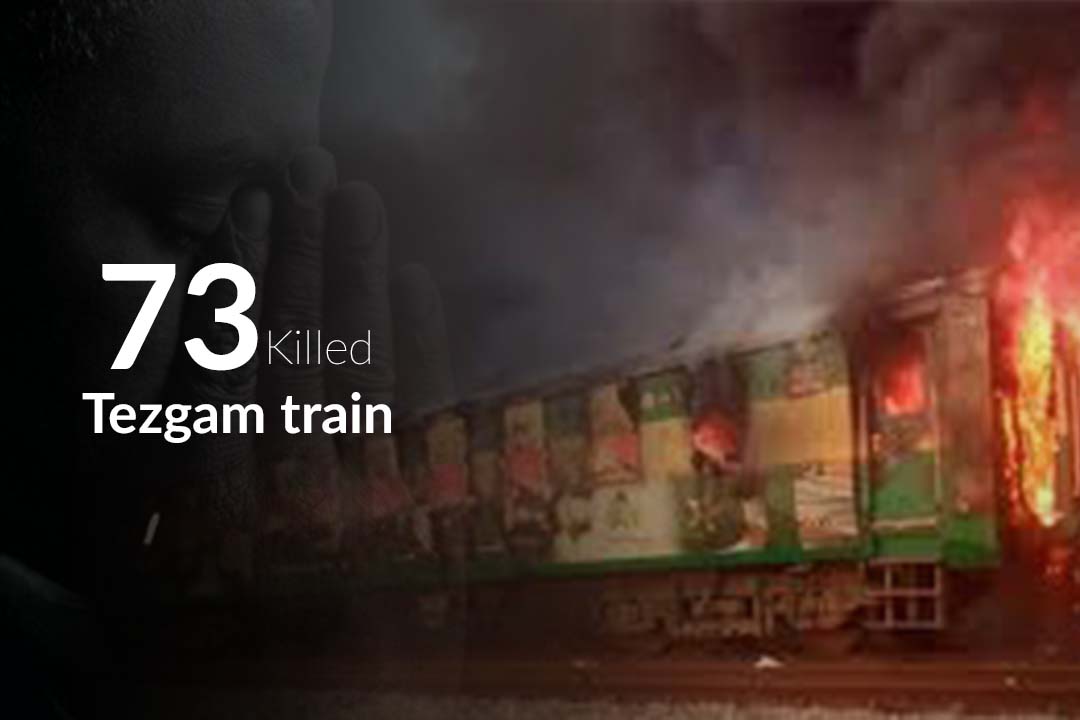 Imran Khan, Pakistan’s Prime Minister, tweeted that he intensely saddened after listening to the terrible tragedy of the Tezgam train. The PM said that his condolences go with the family members of victims and prayers for the quick recovery of the injured. He ordered an instant inquiry to be done on an urgent basis.

Deeply saddened by the terrible tragedy of the Tezgam train. My condolences go to the victims’ families & prayers for the speedy recovery of the injured. I have ordered an immediate inquiry to be completed on an urgent basis.

In addition, Arif Alvi, the President of Pakistan, also expressed deep sorrow on the loss of many precious human lives in the tragic train incident. He prayed for the people who lost their lives in the incident and their bereaved families and wished speedy recovery of the injured.

He prayed for the departed souls and the bereaved families and wished speedy recovery to the injured.

Politicians on the incident of Train accident

The opposition leader and second-largest political party of Pakistan PML-N President, former Chief Minister of Punjab Shehbaz Sharif, tweeted that he felt heartbroken at such a massive train tragedy. He offered heartfelt condolences to the bereaved families and prayed for the speedy recovery of injured.

Heartbroken at such a massive train tragedy near Rahim Yar Khan. The whole nation is grieved on this heart-rending incident.

My heartfelt condolences to the bereaved families & prayers for the injured for early recovery!

Chairman of PPP, Bilawal Bhutto Zardari, said that train tragedy must investigate immediately and assured accountability. Khan must keep his pre-election promise and sack the railway minister until the completion of the investigation.

Heart wrenching news from this morning. #tezgam tragedy must immediately be investigated and accountability ensured. Railway Minister stooping to a new low by victim blaming. outrageous as it is this minister who has the highest record of train accidents on his watch. 1/2

The governing party, PTI’s leader Shireen Mazari, said in a tweet that the incident happened due to the blast of a cylinder carried by a passenger. Her prayers, as well as condolences, go to the families of victims. She added as she remembered while traveling by train, the authorities did not do baggage checks or restrictions enforced.

Terrible Tezgam train tragedy with gas cylinder carried by passenger exploding. Prayers and condolences go to the victims families. A tragedy that could have been avoided but ever since I can recall while travelling by train no baggage check or restrictions enforced. Tragic.

Furthermore, leaders of Pakistan Awami Tehreek, Millat-i-Jaferia Pakistan andMajlis Wahdat-e-Muslimeen also sent their condolences to families of victims and called upon the concerned authorities to ensure the best medical treatment to the injured passengers and hold a quick inquiry into the incident.

Jamiat Ulema-i-Islam Chief, Maulana Fazlur Rehman, issued a sympathy statement for the victims of the incident. He said that such events occur because of poor planning at the administrative level. Also, he demanded a detailed investigation into the incident. Maulana postpones his Azaadi March Jalsa for one day against the government of Imran Khan due to inflation and high prices of common use things.

In July of this year, a train collision happened between a freight train and a passenger train, Akbar Express had killed over twenty and injured over eighty people.

The same year in June, three people lost their lives when a passenger train (the Jinnah Express) hit a cargo car near Hyderabad. At that time, the railway minister Sheikh Rasheed accepted the responsibility of the incident and sought an apology from the nation.