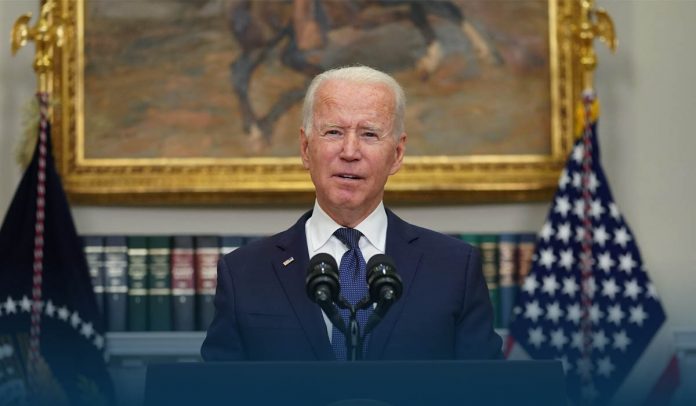 On Tuesday, the U.S. President Joe Biden said that America is sticking to his mandated 31st August deadline of completing the American forces pullout from Afghanistan despite global and domestic pressure to delay the troops’ withdrawal date, however, left open the chance to extend the set deadline, saying that achieving the goal depends on assistance from new Afghan rulers.

In his 3rd broadcasted address on strife-torn Afghanistan since it fell to Afghan Taliban hands, the American leader said from the West Wing of the White House that they’re presently on pace to complete the withdrawal by 31st August. In addition, he’s asked the U.S. State Department and the Defense Department for contingency plans to regulate the timetable that become required.

.@POTUS @JoeBiden said he’ll stick to the 8/31 deadline for withdrawal from Afghanistan. There are still thousands—including Americans, Christians, women, children & those who worked for & w/Americans over the last 20 yrs—who are in danger & want to escape this onslaught of evil.

Joe Biden has experienced the political pressure to delay the withdrawal deadline from his fellow Democrats in Washington and American allies such as the United Kingdom.

However, Joe Biden made obvious Tuesday that the more sooner U.S. could complete, the better. Moreover, each day of pull-out operations brings added threats to their forces. According to the numbers released on Tuesday by the White House, American troops have supported relocated almost 70700 people since 14th August. Since July end, America has evacuated about 75900 people.

Nearly four thousand U.S. citizens, along with their families from the Taliban-led country, have been relocated by the American military. That’s a number the U.S. Defense Department anticipates to rise as America concludes its military operation in Afghanistan.

Earlier on Tuesday, in the Afghan capital, the Taliban said that all foreign removals from Afghanistan must be finished by the set deadline. Moreover, a group spokesman pressed Washington D.C. to prevent taking Afghanistan experts like doctors and engineers out of Afghanistan.

Meanwhile, Boris Johnson, the U.K. Prime Minister, said the G-7 countries wouldn’t recognize an Afghan Taliban administration unless it assures people could flee the country if they desire, both before and after the 31st August 2021 deadline.

The U.S. President said that the world’s seven largest so-called advanced economies, NATO, the EU, and the U.N., have agreed to stand together in their approach to the Afghan Taliban. Mr. Biden stated that they’d judge the Taliban by their moves, and they’d work together on any steps they take moving forward in response to Afghan Taliban behavior.