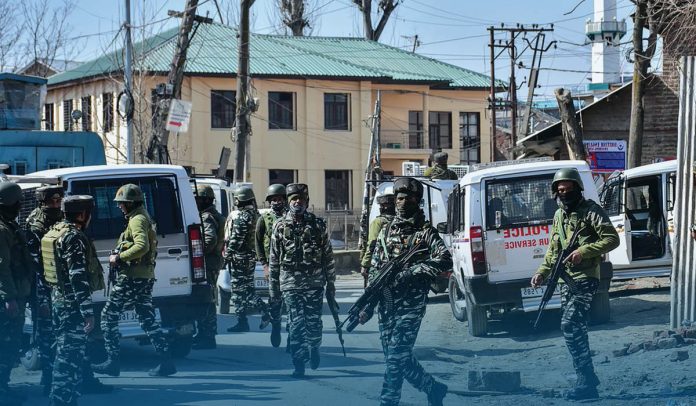 Law enforcement said that gunmen killed two laborers in two targeted attacks on Saturday night in Indian-occupied Kashmir, days after five people were fatally shot similarly in the disputed region. The deadly attack comes a few hours after law enforcement stated administrative forces killed four suspected militants in the recent day and claimed 3 of them were involved in the past week’s killing of three minorities.

According to police, two non-local workers, who were Hindus from Bihar, were shot in the Southern Wanpoh region of Kashmir valley, and a third was severely wounded. Moreover, Police inculpated militants fighting against Indian rule for the Oct. 16th attacks in the region’s main city and a village in South Kashmir called that “terror strikes.”

#Terrorists fired indiscriminately upon #NonLocal labourers at Wanpoh area of #Kulgam. In this #terror incident, 02 non-locals were killed and 01 injured. Police & SFs cordoned off the area. Further details shall follow. @JmuKmrPolice

In the first event in Srinagar, Police stated militants fired at a Hindu Street vendor from Bihar. He died at the scene. Then, about after an hour, a Muslim worker from Uttar Pradesh was shot and severely injured in the Litter village of Pulwama district. According to police, later, he died at a medical facility.

In the past week, attackers deadly shot three Hindus, a local Muslim taxi-driver, and a Sikh driver in the area in a sudden rise in violence against civilians that both anti- and pro-India Kashmir extensively criticized.

Law enforcement stated that 3 among the insurgents were involved in the assassination of a famous local Hindu chemist and 2 school-teachers of Sikh and Hindu beliefs. Following the series of killings recently, authorities have kept over a thousand people in their custody in sweeping crack-downs across the Vale of Kashmir.

Five Indian soldiers were also killed on Monday in the deadliest firefight with militants in 2021 in contiguous forested Surankote town.