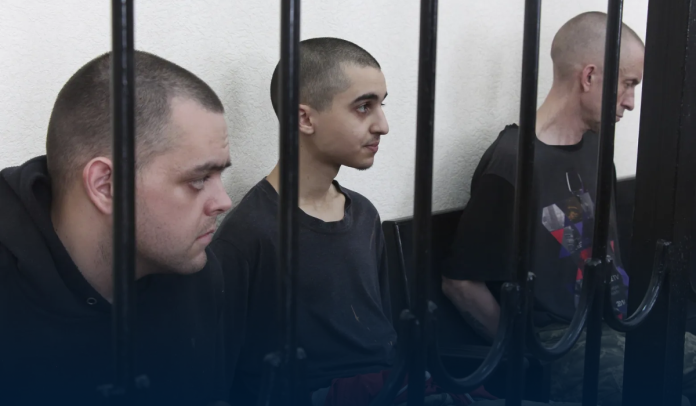 One Moroccan and two citizens of the United Kingdom were sentenced to death Thursday for fighting in favor of Ukraine in a sentence handed down by the Russian pro-Moscow rebels. Additionally, as the Russian troops continued a milling war of attrition in the east of Ukraine, the Russian leader Vladimir Putin seemed to relate his actions to those of Peter the Great (Peter I) in the eighteenth century and said they wanted to take back historic Russian lands.

A court in the Donetsk People’s Republic in Ukraine found three foreigners guilty of pursuing the brutal overthrow of power, an offense punishable by death in the anonymous eastern nation. The court also convicted all three men of terrorism and mercenary activities. RIA Novosti, the Russian state news agency, reported that the culprits –Brahim Saadoun, Aiden Aslin, and Shaun Pinner – will face a firing squad. Judges give them a month of appeal.

Oleh Nikolenko, the spokesperson of the Ukrainian Foreign Ministry, denounced the Russian court proceedings as illegal and said that such show trials put the interests of propaganda above the ethics and law. Moreover, he stated that all foreign nationals fighting as part of the Ukrainian armed forces should consider Ukrainian military troops and be protected as such.

The West and Ukraine condemned a pro-Moscow court that sentenced three foreign nationals to death for fighting for Ukraine. They called the proceedings bogus and a violation of war rules. On the other hand, the Russian military argued that foreign fighters battling against Russia are not warriors and should expect long prison terms if captured.

Emmanuel Macron, the President of France, told Ukrainian President Volodymyr Zelensky that France was ready to deploy additional heavy weapons to Ukraine. However, French officials didn’t elaborate on weaponry aid. The telephonic talk came after the French president angered Ukrainian officials by saying the world economies should not humiliate the Russian president.

Luz Truss, the Foreign Secretary of the U.K., criticized the sentencing as a sham judgment with no legitimacy. additionally, Jamie Davies, the spokesperson of Prime Minister Boris Johnson, said that under the Geneva Conventions, prisoners of war are entitled to immunity as fighters.